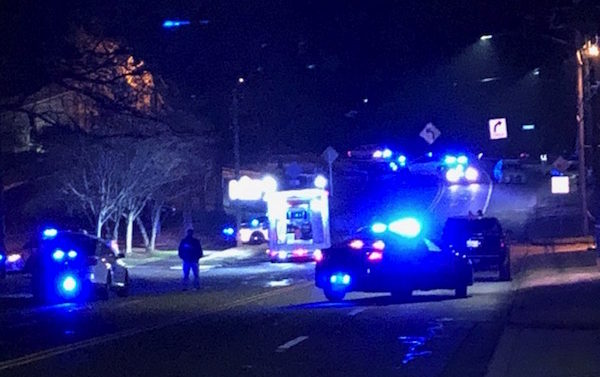 Athens-Clarke County police shot and killed a man they “believed to be armed with a weapon” during a confrontation off Westlake Drive at about 6:30 p.m.

According to a news release from ACCPD issued at 10 p.m.:

ACCPD officers encountered an adult white male who brandished what is believed to be a firearm in a threatening manner. Officers issued verbal commands for the individual to drop the firearm. The individual disregarded the officers’ command and charged the officers with the firearm in his hand pointed in the officer’s direction. Multiple officers, fearing for their lives and safety, discharged their firearms. After the shooting, officers immediately rendered first aid and the individual was transported to a local hospital where he succumbed to his injuries.

Police have not released the man’s name because his family has not been notified, nor did they say how many officers were involved in the shooting or release their names. Those officers have been placed on paid leave, according to the news release.

As is standard with officer-involved shootings, the Georgia Bureau of Investigations has been called in to investigate it.

Officers were called to the 800 block of Westlake Drive in reference to a man with a firearm.

“The officers engaged that individual and were speaking with him over an extended period of time, 10 or 15 minutes, where they were trying to get the individual to put the firearm down,” Spruill said.

“At one point during the encounter, the individual moved toward the officers in an aggressive manner, raised what they believed what us a gun in the direction of the officers,” he said. “The officers felt threatened, felt like their lives were in danger, and they discharged their firearms.”

Neither Spruill nor Ayers would confirm with 100 percent certainty that the man was, in fact, holding a gun, saying that is part of the investigation.

“We’re still in the very early stages of the investigation,” Spruill said.

Spruill said he was “not at liberty to say” how many officers were involved, but “eventually their names will be made public.” The name of the man who was shot will be released “within the next day,” he said.

When the man charged them, Spruill said the officers believed “they had no other choice but to use deadly force.” Using a stun gun was not an option because of the distance involved, he said.

Spruill declined to comment on whether the man might have been on drugs or had mental issues, and did not know why he was agitated. That will be part of the investigation, he said.

The officers were wearing body cameras, and footage of the incident was captured. “More than likely” that video will be released once he reviews it, Spruill said.

“These things usually takes several days to 30 days to complete,” Ayers said. Results of an autopsy and toxicology report “could take some time.”

Once the GBI’s investigation is complete, it will be handed over to District Attorney Ken Mauldin, Ayers said.