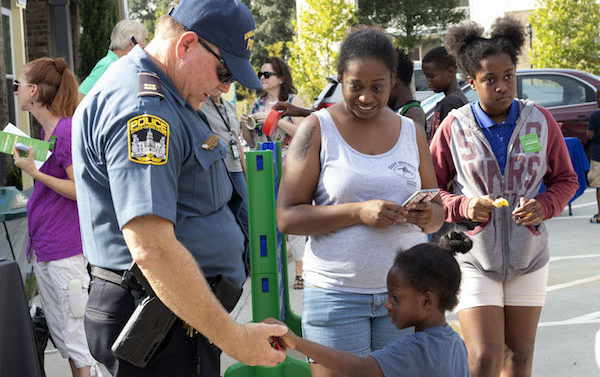 Athens-Clarke County police held a cookout in the Columbia Brookside neighborhood off Hawthorne Avenue last week. Under Chief Scott Freeman, the department has held occasional cookouts as a way to improve relationships between police and local communities.

The Athens Anti-Discrimination Movement will host a town hall meeting on community policing and race relations at the Athens-Clarke County library from 5:30–7:30 p.m. Thursday.

Co-founder Mokah-Jasmine Johnson said that residents and community leaders are concerned that ACC police aren’t doing enough to build trust and ensure safety in the wake of two recent incidents—an officer who hit a fleeing suspect with his car in June, and another officer who tackled a 10-year-old boy in July.

The meeting “will bring law enforcement officials and the community together to engage in a positive dialogue to help lead to improved mutual understanding, prevention of police misconduct and increased trust of community policing,” according to a news release. “Residents and police will talk frankly about race relations, community policing, safety and the recent incidents involving Athens-Clarke County police.”

Panelists will include Chief Scott Freeman, ACCPD chaplain Shane Sims and Jawoski Collins, the father of the boy involved in the July incident.

Attendees are asked to register in advance and fill out an online survey.

Live Review: The Head and the Heart at Georgia Theatre

Anti-Abrams Flyers Found Inside Copies of Flagpole Downtown, on Campus