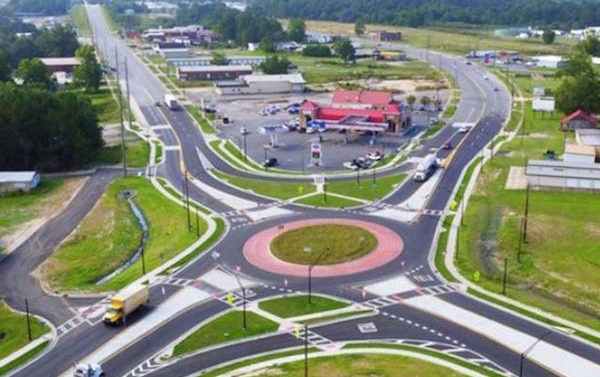 GDOT used this roundabout in Colquitt County as an example of what a roundabout on 441 near Bishop could look like.

Bishop Mayor Johnny Pritchett has written to the Georgia Transportation Board criticizing the proposed close-in U.S. Highway 441 truck bypass of Bishop and saying the state should resurrect the 2007 plan that called for a bypass further east of the city.

Pritchett told state Transportation Board Chairman Jamie Boswell that the current plan, which the state revealed in March, does not address his concerns about traffic inside Bishop reaching the bypass, the use of roundabouts on each side of the city and the safety of the road south of Bishop.

In the letter, Pritchett also said he is concerned that the proposed route might lead the University of Georgia to move its equestrian facility from its current location near the proposed highway, and that such a loss would adversely affect the economy and reputation of Bishop.

Pritchett said that Boswell told him he had forwarded the letter to Albert V. Shelby III, state program delivery engineer with the Georgia Department of Transportation, but that he has not gotten any other response to his correspondence, sent in June.

Just before Pritchett sent his letter to Boswell, Bruce Anderson Jr., project manager with GDOT, sent out a newsletter indicating that the state has continued its studies for the proposed close-in bypass and widening of U.S. 441 between Watkinsville and Madison.