Georgia Lawmaker Makes an Ass Out of Himself—Literally 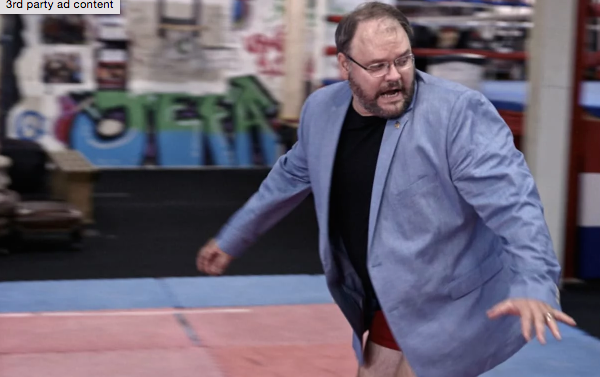 In the middle of a summer chock-full of political hilarity, with Georgia taking center stage nationally with its candidates and their guns and pickup trucks, another Georgian has set a new low for the state.

On Sunday’s episode of Sacha Baron Cohen’s new project “Who Is America?” the intrepid host—who says he is “in Mossad… I mean, not in Mossad”—persuades naïve Georgia Rep. Jason Spencer (R-Woodbine) to appear on the show ostensibly to learn how to identify and intimidate terrorists. Spencer fails to catch Cohen’s clues that he is not what he says and proceeds to follow the most ridiculous instructions.

Cohen probably zeroed in on the controversial Spencer thanks to his public threat against a black former state representative who was calling for the removal of Confederate statues and his proposed 2016 bill banning burkas.

The highlight of the show comes when Cohen—posing as an Israeli military expert—tells him in an exaggerated accent that the best way to intimidate a terrorist is to threaten to make him “be seen as homo,” and that “if your buttock touch them, it will mean they have become…”

Cohen then convinces Spencer to expose his rear end and attempt to touch him with it. Spencer pulls down his trousers and runs backwards toward Cohen with his bare ass, shouting threats like, “Drop that gun or I’ll touch you with my ass! USA!”

This is after Spencer repeatedly shouts racial slurs in an effort to attract attention while being kidnapped by imaginary ISIS members.

The scene is one of the most audacious bits of satire by the Borat and “Da Ali G Show” star, who has made a career out of making otherwise serious people do preposterous things on camera.

Local activist and comic actress Lisa Mende said Cohen’s performance was  “a little bit of guerrilla filmmaking,” and that “the scariest thing is that he shows how willfully complicit [Spencer] is with misinformation,” when he doesn’t pick up on the “Mossad/not Mossad” ruse. (Mossad is Israel’s version of the CIA.) She continued, “Spencer is willing to not listen… critically because of a preset belief system.

“It’s not even that he is willing to make a jackass of himself, but that he is willing to buy in to any kind of absurdity that bolsters his belief system,” she said. “He’s willing to believe that the terrorist’s biggest fear is to be touched by a man and becoming queer. It’s a willful ignorance to set aside your intelligence and foster your core beliefs that are not based on reality.”

Yet Spencer may have the last laugh as he resists calls from Georgia’s political establishment to resign, even though he lost the recent primary after four terms in office. He says he will serve out the final five months of his term.

UPDATE: Spencer has sent his letter of resignation to House Speaker David Ralston, per the website Allongeorgia.