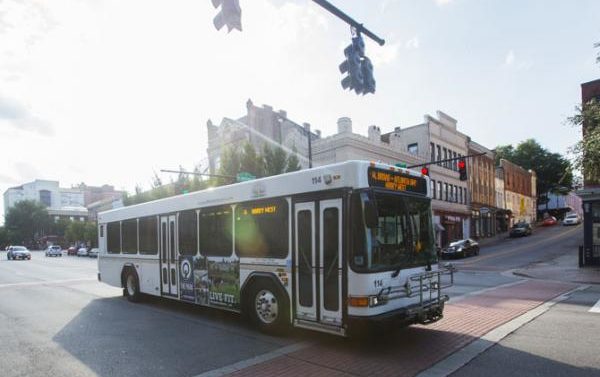 The changes mainly affect service to the Eastside, the Westside and the University of Georgia campus. Buses that run along Sanford Drive have been rerouted during construction, service has been added to Whitehead Road, and several Eastside bus routes have been revamped to create a circulator between Walmart and campus:

Route 5 – The northern portion of the former route will be discontinued, including service along Hawthorne Avenue, Prince Avenue, and West Dougherty Street. The discontinued portions will be serviced by the Route 7 revised route. Route hours, days of operation, and frequency remain unchanged.

Route 9 – Route 9 will provide bi-directional service on Lumpkin Street. Evening and Saturday services will be discontinued due to lack of ridership and will be serviced instead by Route 27 evening and weekend services.

Route 12 – Route 12 will provide service from Riverbend Parkway to the East Campus Village and bi-directional service on River Road and Carlton Street.

Route 22 – Route 22 is now an east side circulator route that connects revised routes 25 and 26 by removing the west end of route formerly operating on the University of Georgia Campus. The revised route includes new service along Gaines School Road and Lexington Road, allowing Route 22 to transfer at the Walmart on Lexington Road with Routes 25 and 27.

Route 25 – Route 25 now provides bi-directional service from the Multimodal Transportation Center to the Lexington Road Walmart, offering more direct service for patrons that do not need access to other portions of the former Route 25 route. Patrons can transfer with Routes 22 and 27 at the Walmart. Portions of the former Route 25 no longer serviced by the revised route will be serviced by a combination of Routes 22, 26, and 27.

Route 26 – Route 26 is revised to provide bi-directional service from the Multimodal Transportation Center downtown to housing and retail outlets on the east side of Athens. Portions of the former Route 26 that are discontinued under the revised route will be served by the revised Routes 22 and 25.

Route 27 – Route 27 will operate an extra three hours on weekdays and all day on weekends. The route will provide new service on Whit Davis Road.

The changes were approved by Athens-Clarke County Commission as part of Athens Transit’s transit development plan update, but implementation was delayed in May.

For maps and more details on the changes, visit the Athens Transit website.

New Law: Put Down Your Phone While Driving