Police: Pedestrian Hit on Prince Was Not in Crosswalk 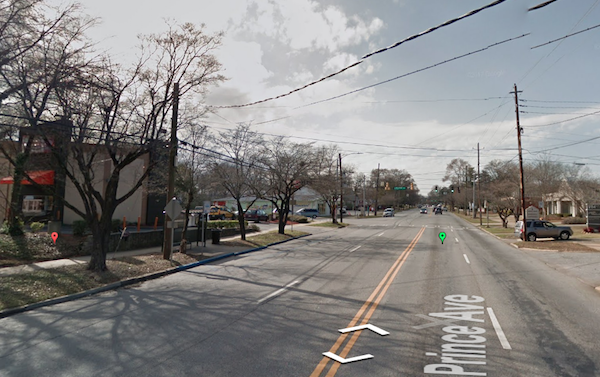 A pedestrian who was hit by a minivan on Friday was not using a nearby crosswalk, according to Athens-Clarke County police.

The pedestrian, an approximately 51-year-old man with a Honeysuckle Lane address, was crossing Prince Avenue from south to north near the entrance to Dunkin’ Donuts at about 8 a.m. Friday when he was hit by an eastbound Honda Odyssey driven by an approximately 41-year-old Athens man, according to a police report.

“The pedestrian walked into the path of the Odyssey and was struck by [it],” the report says.

There is a crosswalk just a few yards away, on the east side of the Prince–Milledge Avenue intersection. But it can be confusing to use because the button to activate the “walk” sign is not in an obvious location, and it’s a “beg button,” meaning pedestrians have to push it for a “walk” sign during the traffic-light cycle.

The driver has not been charged.