Rep. Jody Hice Town Hall Draws 100 People and a Chicken, but No Hice 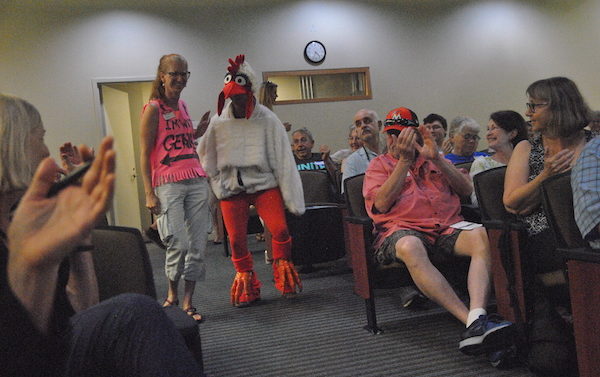 On one of the busiest spring Saturdays in Athens, 100 people attended a town hall for District 10 congressman Jody Hice. The one notable absence was Hice himself.

Michael Goltzer of Athens was one of several people who addressed a photo of Rep. Hice (R-Social Circle) propped up in a chair on the stage of the Athens Regional Library on Apr. 22. He pointed out that the town hall was the most basic form of democratic conversation and lamented Hice’s refusal to engage with his constituents.

“Just tell us what we have to do to get you to meet with us,” he said.

After the Greensboro event in February where hundreds of people from Athens drove down to voice their complaints about the Trump Administration to Hice’s staff, Athens for Everyone reached out to Hice, requesting a town hall during his 18-day recess from Congress in April.

Hice has never held a town hall meeting in Athens in his two-and-half years in office. Despite the statement from his office that Hice would not attend the Town Hall, A4E decided to continue with the event.

“We wanted to provide a forum for his constituents to voice their concerns and demand that Jody Hice hold a town hall,” event organizer Briana Bivens said, “because right now we are doing his job for him.”

Toni Reed of Indivisible Georgia District 10— a group that helped A4E promote the town hall— provided attendees with an overview of the dozen or so pieces of legislation co-sponsored and introduced by Rep. Hice since he took office last year. These included a bill permitting people to hunt and fish on federal land without a license, several anti-abortion bills, and a bill to dissolve the U.S. Department of Education. Members of the audience gave frustrated sighs as Reed read over the bills, none of which had been signed into law.

“It’s too bad he’s not here,” Reed said, “because I’m sure we’d have a lot to say to him about some of these.”

A4E’s Adam Lassila suggested that Hice was too afraid to meet with his constituents, providing the cue for someone dressed in a chicken costume to appear and begin clucking up and down the aisle as Athens-Clarke Commissioner Melissa Link took to the stage.

“Thanks goes to Jody Hice’s alter ego for showing up,” Link said to the chicken. “That’s the closest we’ll get to him.”

After Link encouraged attendees to stand up to Hice and President Donald Trump on environmental issues, nine people came to the stage to address a photo of Hice, or at times, his proxy, the chicken.

Emma Jones of Georgia Indivisible District 10 wanted clarity on the cost of health care. She said there’s no way to call around and get the exact cost of doctor visits, medical procedures and supplies the way that one can call up Lowes and get the cost of a washing machine. She argued against the rhetoric that citizens should simply be better health care consumers.

“That argument doesn’t work with me,” she said.

Andie Freeman of Arnoldsville learned the true cost of health care after her husband was injured in a motorcycle accident. She turned to the photo of Hice and asked, “Why does health care— not health insurance—in this country cost 50 percent more than any other developed country in the world?”

Garrett Daniel, a student at the University of North Georgia living in Watkinsville, spoke his concerns about Trump’s plan to cut taxes, and and what that might mean for students seeking to better themselves through an education. He stated lessons learned from Upton Sinclair’s The Jungle that trickle-down economics never benefits those in the middle or at the bottom.

“Please do not support Trump’s massive tax cuts and deregulation,” he said to Hice’s photo.

Hice faced no opposition in the last election, and Athens for Everyone hopes to change that. A4E President Kelly Happe turned to Rep. Hice’s image and told it that the day of unopposed elections was over, to much cheering from attendees.

No one has officially announced their candidacy against Hice, but  [Correction: Kellie Lynn Collins of Thomson has registered to run as a Democrat.] Richard Winfield, professor of philosophy at the University of Georgia, said he is strongly considering running as well. Winfield said Hice is part of an establishment whose policies are “pushing democracy into oligarchy.” If he runs, Winfield said he would fight for progressive values, including balancing power between employees and employers and mandating vacation and sick leave regardless of level of employment.

Tim Denson, A4E’s organization coordinator, is not ready to give up on Hice holding a town hall in Athens.

“We are going to give him another chance to come here,” he said to attendees. “Keep up the telephone calls.”

After two months of trying to get Hice to come to the town hall, Emma Jones has taken him up on his willingness to meet one-on-one with constituents. She and three other Indivisible Georgia District 10 members have meetings scheduled for May 12.

“Do I think he’ll really be there? I really think he will,” she said. “I expect to talk to him.”

Organizer Alex Blacutt hopes A4E’s town Hall will encourage Hice to hold a public town hall in Athens, or at least let him know that his constituents are paying attention.

“If he won’t listen to us, and if he won’t come to us, then we need to figure out what to do from here,” he said.

Happe encouraged attendees to remember the big picture, even when their representatives don’t show up, or when the work for social change doesn’t produce immediate results.

“Sometimes the work is tedious and exhausting. But it does matter,” she said. “It accumulates over time… It is part of the long game.”

First and foremost, the writer never contacted the Congressman or his office for comment regarding why he was unable to attend the forum. Rather, the individual wrote a one-sided story that was not rooted in fact. For example, two of the Congressman’s sponsored bills have been signed into law (H.R. 5687, the Government Accountability Office (GAO) Mandates Revision Act of 2016, and H.R. 5047, the Protecting Veterans Educational Choice Act), but the writer claimed that “none of which had been signed into law.” While the Congressman respects the group’s right to hold whatever type of forum they choose, their accusation that he is “AWOL” or “a chicken” because he was unavailable to participate in a forum that the group scheduled without coordinating with his office – which is nothing more than an attempt to create a media spectacle – is incredibly disingenuous. The simple truth is that he is available to listen to the people he represents and takes their voices and concerns to Washington. Furthermore, he has offered 1×1 meetings on many occasions, which Indivisible and Athens for Everyone certainly would have taken advantage of if their desire to engage in a dialogue was as genuine as they represent. In order to facilitate a productive dialogue, he has been available and accessible to his constituents through direct meetings, public “Coffee with your Congressman” open houses, tele-town halls, as well as any number of site visits and roundtables, of which a large number of his constituents have taken advantage. As always, he will make time on his schedule to meet directly with Indivisible or Athens For Everyone members should they wish to have a productive and respectful dialogue and not simply a media moment. I hope moving forward that your writers will do their due diligence and uphold journalistic integrity when reporting on stories.