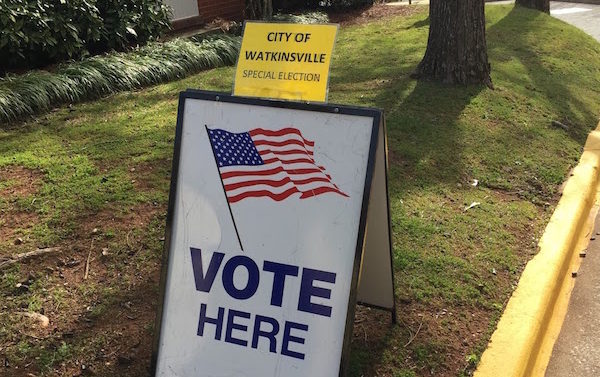 Only 63 of Watkinsville’s 2,117 eligible voters participated in the three weeks of early voting leading up to todays ’s election on whether Sunday sales of alcohol should be allowed at the city’s restaurants and convenience stores.

In the Mar. 17, 2015 special election in the city on liquor by the drink, only 265 voters cast a ballot, representing just a little more than 15 percent of the 1,759 registered voters. Positive votes were cast by 216 of those voters.

Voting on Sunday sales will take place from 7 a.m.–7 p.m. today at the city’s two precincts, City Hall and Annex.

Voters are being asked to vote separately on whether to authorize the Watkinsville City Council to pass ordinances allowing for the sale of beer and wine in convenience stores on Sundays and allowing the sale of beer, wine and alcoholic drinks in the city’s restaurants on Sundays.