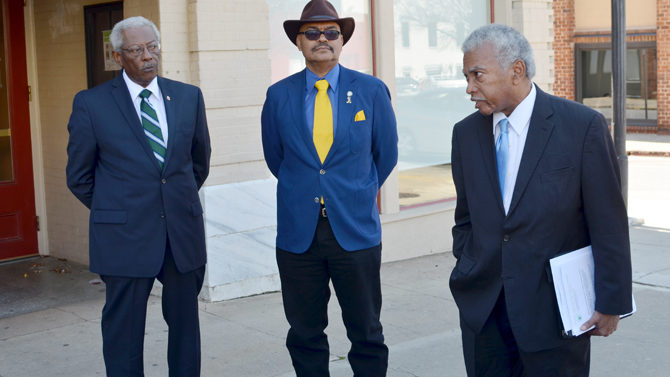 A group of Athens African Americans is calling on the University of Georgia to reconsider its decision to reinter dozens of slave remains at Oconee Hill Cemetery.

“We are very upset by all of this,” said Fred Smith, head of the Athens Black History Bowl, before the group’s annual celebration Saturday at the Morton Theatre. “This is disrespectful to us as black folks.”

The university discovered 27 gravesites while working on an addition to Baldwin Hall, which was built on top of Old Athens Cemetery, also known as Jackson Street Cemetery. UGA officials said in 2015 that they thought all of the remains had been removed during Baldwin’s initial construction in 1938.

UGA initially thought the remains were white, but DNA analysis conducted by UGA anthropology professor Laurie Reitsema on 30 of the remains recently revealed that the vast majority were black.

Smith had been saying for more than a year that he believed the remains were black, citing a 1978 newspaper article quoting former Dean of Students William Tate as saying black remains were discovered when Baldwin was built, and they were moved to a gravesite near the water treatment plant on Barber Street. Since the last official burials at Old Athens Cemetery were in 1856, Smith also believes they were slaves.

“They were owned in life, but UGA doesn’t own them in death,” said DeKalb County CEO Michael Thurmond, an Athens native who wrote a book about Athens’ black history.

The remains almost certainly belong to ancestors of African Americans—and perhaps some whites, as well—living in Athens today, and so the African-American community should have been consulted on what to do with them, Smith said.

“This is a great opportunity, really, for the University of Georgia to build bridges of communication and understanding,” Thurmond said.

Clarke County Board of Education member Linda Davis, who is leading efforts to restore the historic black Brooklyn Cemetery, said the remains should be reinterred there or at another historic black cemetery that is being restored, Gospel Pilgrim.

“I’d like to see these remains reclaimed by our community,” Davis said.

But UGA is planning to reinter the remains at nearby Oconee Hill Cemetery on the advice of the state archaeologist’s office. According to a statement from university spokesman Gregory Trevor:

“Some of us are questioning why the black community did not have input into that [the reburial plans],” Smith said. “Those are our relatives.”

The controversy also comes at a time when UGA has been criticized for glossing over slaves’ contributions to the university’s history in general.