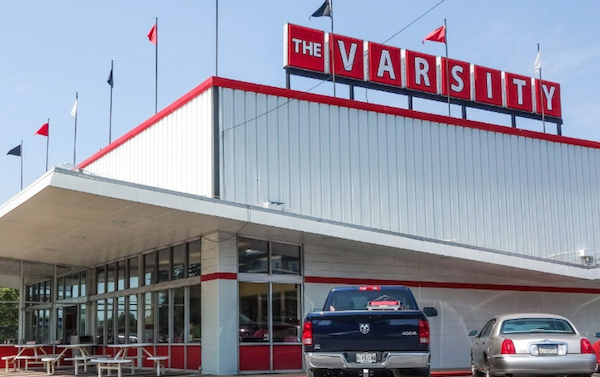 In spite of rumors that have swirled for months and recently intensified, Athens-Clarke County commissioners say they’ve been assured that the owners of iconic fast-food restaurant The Varsity have no imminent plans to redevelop the property.

The Gordy family, which owns the chain of seven restaurants, has assembled nearly the entirely block bordered by Milledge Avenue and Broad, Chase and Reese streets, including purchasing the Dairy Queen that closed last year, an auto repair shop and several homes.

Most of the rumors—all unconfirmed—involve the property becoming a mixed-use development featuring a Publix grocery story, with The Varsity either becoming part of the new development or moving to Epps Bridge Parkway. Others have speculated that the Gordys merely want more parking for car shows and game days, or that the property will become student housing—which seems unlikely, given that its commercial zoning would only allow about 50 apartment bedrooms.

ACC Commissioner Jerry NeSmith addressed the rumors at last night’s commission meeting, saying that an agent for the Gordys called him Monday to assure him nothing is currently in the works. “We have no plans,” NeSmith said the agent told him. “We’ve made no plans. We’ve drawn no plans. We have no plans… I really hope you’ll spread the word that there are no plans.”

The ACC Planning Department confirmed that no plans have been filed. Neither The Varsity nor Publix has responded to Flagpole‘s requests for comment.

The issue came up Tuesday night as part of a discussion on infill housing regulations that the commission approved unanimously. Those regulations are meant to limit oversized McMansions on lots where people buy normal-sized houses, then tear them down.

However, the rules only apply to neighborhoods zoned single-family, which has left residents in neighborhoods like the Hancock Corridor, which mostly consists of single-family homes but zoned multifamily, nervous that developers might eye them next.

“If you can’t build your big dream mansion in Normaltown, are you going to move to Hancock?” Commissioner Melissa Link said.

Some speakers specifically mentioned the potential Varsity development, including Adam Hebbard, president of the Athens-Clarke Heritage Foundation Board of Trustees.

He said the ACHF supports the infill ordinance, “but we are also keenly aware this ordinance would not provide protection to all neighborhoods,” specifically West Hancock Avenue, “one of the few intact [historic] African-American neighborhoods in Athens.”

Link was planning on introducing a motion to put a moratorium on development in West Broad, Rocksprings and the Hancock Corridor to address infill issues there, but Denson and county Attorney Bill Berryman ruled that her proposal wasn’t germane and couldn’t be discussed.

Several Hancock residents also addressed development pressure at the end of the meeting, when speakers can talk about anything.

“Everyone in the neighborhood is incredibly concerned about the encroaching development,” said Casey Nissenbaum.