UPDATE: The Chess and Community Conference Has Been Postponed 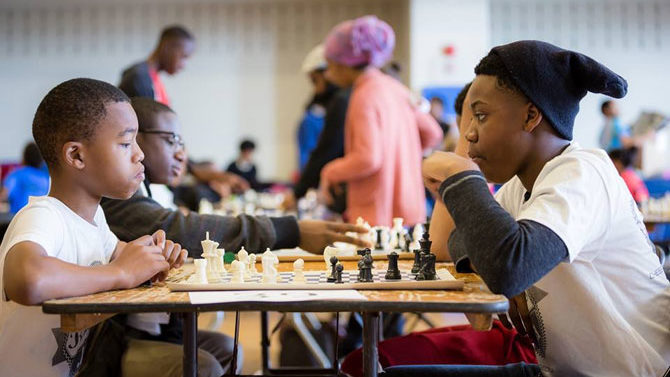 Editor’s Note: This event has been canceled because of the likelihood of snow on Saturday morning, Chess and Community Executive Director Lemuel LaRoche announced this morning. It will be rescheduled.

Local nonprofit Chess and Community will hold its annual conference Saturday from 10 a.m.–5 p.m. at UGA’s Tate Student Center featuring a keynote speech from the mayor of Tallahassee, FL, and chess matches between Athens youth and police, UGA football players and county commissioners.

The conference will kick off with a welcome from Athens-Clarke County Manager Blaine Williams, followed by a speech by Andrew Gillum, who was elected to the Tallahassee City Commission at age 23 while a student at Florida A&M University and elected mayor in 2014. Attendees will also hear from Beau Shell, a young entrepreneur known as the Lil’ Ice Cream Dude.

In addition, contest winners will read their essays about their 20-year vision for Athens.

ACC commissioners, ACC police officers and UGA football players will then take on Chess and Community members in chess matches, followed by a youth chess tournament.

The conference is free and open to the public, although donations are appreciated.

For more information, visit the Chess and Community website.

Get Ready for Snowpocalypse 2017