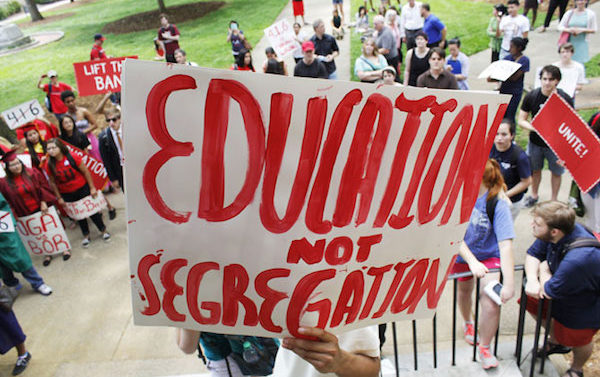 Georgia residents who were brought to the U.S. illegally as children and are protected from deportation by an Obama Administration policy should be allowed to pay in-state tuition at Georgia colleges, a Fulton County court ruled today.

At issue is the Obama administration’s Deferred Action for Childhood Arrivals program, or DACA, which grants work permits and temporary deportation deferrals to immigrants who were brought to the U.S. as children without authorization. Ten DACA recipients living in Georgia sued the Board of Regents in the Fulton County Superior Court for the ability to pay in-state tuition, which is about three times less expensive than Georgia’s out-of-state rates.

A 2008 state law says noncitizens cannot pay the in-state rates unless they are “legally in this state.” And a Board of Regents tuition policy closely tracks that law. Assisted by local immigration attorney Charles Kuck, the plaintiffs in the lawsuit pointed to federal records that say DACA recipients are lawfully present in the U.S.

Fulton Superior Court Chief Judge Gail Tusan agreed with that argument in the ruling she issued Friday. University System of Georgia officials, she wrote, are “hereby compelled to perform their duty in applying the federal definition of lawful presence as it relates to students who are DACA recipients and to grant them in-state tuition status.”

The ruling does not address the Board of Regents policy that bars undocumented students from attending five competitive-admission public universities, including UGA, regardless of their academic credentials or DACA status.

But it will apply at the University of North Georgia, an open-enrollment college with a campus in Watkinsville that admits undocumented immigrants but charges them the international rate, even if they live in Georgia.

The Board of Regents and state Attorney General’s office have not said if they plan to appeal.