ACC Commissioners Will Probably Approve a Civil Rights Committee—But Which One? 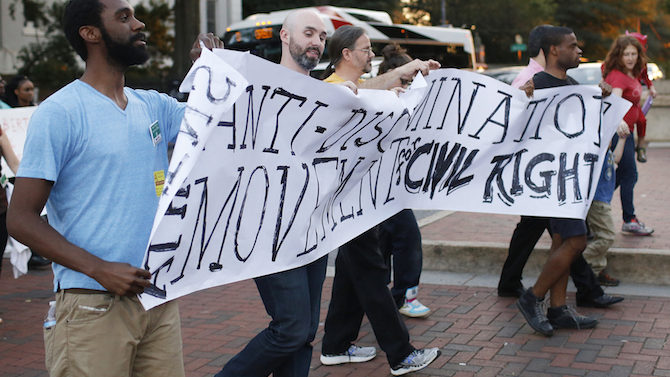 The commission is scheduled to vote on an ordinance banning bars from using bogus private events or selectively enforcing dress codes to keep out people of color. Local activist groups have been lobbying for a civil rights committee to supplement that narrow ordinance.

Until a couple of days ago, it seemed that a majority of commissioners were resisting that idea. Now, though, there are three different versions of a civil rights committee headed to the floor Tuesday.

Late last week, Commissioner Kelly Girtz announced that he plans to introduce a commission-defined option directing county staff to develop a framework for a civil rights committee and present it to the commission by the end of fiscal 2017 in June.

Commissioner Melissa Link said she would offer a friendly amendment to Girtz’s CDO requiring the ACC manager and attorney to take public comment on the committee.

Over the weekend, commissioners Sharyn Dickerson, Andy Herod, Harry Sims and Allison Wright filed another CDO, which is worded similarly to Girtz’s, but also includes directions to compile a list of community resources available to assist those who feel they’ve been discriminated against.

“Ours provides our staff more flexibility to come up with a mechanism that can be tailored to the specifics of Athens,” Herod said.

This is significant for another reason: It means that at least eight commissioners are in favor of some form of civil rights committee—the six who will introduce CDOs, plus Jared Bailey and Jerry NeSmith, who’ve previously expressed their support. That number includes three commissioners—Dickerson, Herod and Sims—who’ve expressed skepticism about a civil rights committee in the past. (Wright hasn’t tipped her hand either way.)

But while it seems that a civil rights committee now has overwhelming support, that doesn’t mean it’s guaranteed to pass. With two, maybe three competing CDOs, it could get messy, and one side might not support the other side’s. Plus, there’s the question of who gets the credit.

“While it is odd that they would not just vote for the language proposed by Commissioner Girtz, Athens for Everyone is glad to see commissioners Herod, Sims, Wright and Dickerson are finally taking action on creating an Athens Civil Rights Committee,” said Tim Denson of A4E, one of the groups pushing for the committee. “The important thing is that this committee is created to combat discrimination and help create a culture of compassion and understanding. Whose name is on the paper isn’t really important.”