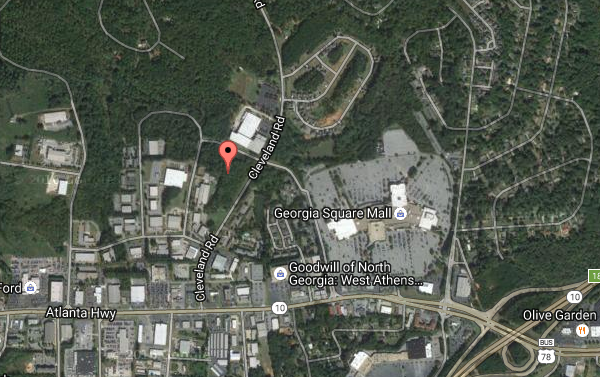 The location of the new Clarke County extension office.

After a lengthy and at times hostile debate, the Athens-Clarke County Commission chose an office park off Atlanta Highway as the site for a new UGA Cooperative Extension office Tuesday night.

The site was among six put forward by a site selection committee. After the University of Georgia refused to let ACC build the center on land it owns off South Milledge Avenue, the Cleveland Road site rose to the top because the county is also building a new fire station there, reducing costs for the underfunded $2.5 million SPLOST project.

Other sites would have required scaling back the project. Even so, the committee recommended sites on Lexington Road and Gaines School Road over Cleveland Road.

Several 4-H representatives and others who use the facility spoke against that site.

“It should be something we’re proud of, not something we tuck back where people can’t find it,” said Leslie Johnson.

Tim Denson of Athens for Everyone urged the commission to put off a decision for another round of public comment.

“It seems an Eastside location would be more fitting because most farms in the county are located there,” said another A4E member, Chris Dowd.

Commissioner Jared Bailey made the case for rejecting the Cleveland Road location, although he acknowledged he did not have a better one to offer.

“It’s not on a bus line,” Bailey said. “It’s off a congested highway, hidden in a small commercial park… It’s the worst place you could possibly put it. It’s out there. It’s way out there.”

Bailey added that he is “disappointed” and “embarrassed” that UGA was not more, well, cooperative. Administrators told county officials that the extension office did not fit in with the university’s master plan.

Commissioner Melissa Link complained that two sparsely attended public hearings on site selection weren’t well publicized, extension employees and a user group were not consulted in the final stages, and employees have been out of town at 4-H conferences while the decision was made.

While a site closer to the city core might be preferable, commissioners Kelly Girtz and Sharyn Dickerson noted that 5–7 acres aren’t easy to come by inside the Loop, especially at a price the city could afford. That’s how much land the extension service said it needed for office space for 16 people, classrooms, a 200-person meeting room, parking, demonstration gardens and a future pavilion.

Nor, as Commissioner Andy Herod said, is there any guarantee a better site would arise if the commission put off a decision. Herod, however, favored a site off Lexington Road that was one of the five finalists.

As for accessibility, NeSmith measured the drive times from various points around the county, and said they’re comparable to the current location on West Broad Street because the new site is right off the Loop.

“I don’t see it as inaccessible at all,” he said.

After a few minutes’ confusion during a vote to cut off debate, the final vote was 7–3, with Herod, Link and Bailey opposing the Cleveland Road site.

The extension, a partnership between UGA and county governments as part of its land-grant mission, is home to the popular 4-H youth leadership program and offers services like classes on farming, environmental stewardship, gardening, cooking, nutrition and family budgeting.