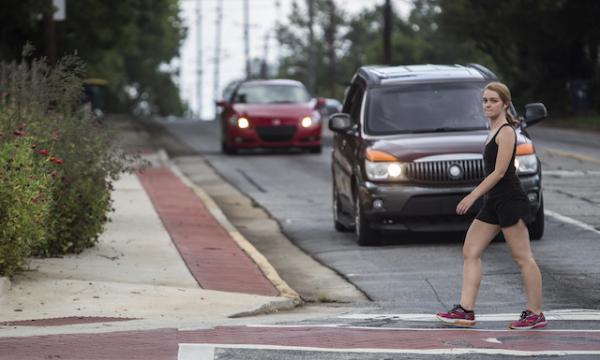 Whereas the ACC Transportation and Public Works Department had recommended replacing the center turn lane on Chase from Boulevard to Rowe Road near the Loop with bike lanes, under Link’s plan the bike lanes will start north of the last house on Chase to alleviate concerns from residents about turning into and out of their driveways without the turn lane.

The bike lanes will be painted green to improve visibility and separated by a striped buffer from car lanes.

Teardrop-shaped medians will be added to the road near the railroad bridge and at the school.

In addition, Link added a crosswalk at Nantahala and moved a proposed crosswalk at Chase Street Elementary to the midpoint of the retention pond on the property. Another crosswalk on the south side of the school has been placed in the hands of the Safe Routes to School Committee.

Several commissioners criticized the last-minute nature of Link’s plan, which was introduced Friday and not vetted by the public. They also said the $34,000 cost—in addition to money already budgeted—would take funding away from other, more needed projects.

Link said she was forced to put forward a “commission-defined option,” as elected officials’ proposals that deviate from staff’s are known, because TPW failed to fully inform the commission about public comments on the project or incorporate them into the plans, prompting Commissioner Mike Hamby to tell her angrily to stop “throwing staff under the bus.”

At the request of Commissioner Sharyn Dickerson, the vote was split into three parts. Plans for the stretch of Chase between Prince and Boulevard, which involve few changes, passed unanimously, as did plans to replace two travel lanes on the four-lane portion north of the Loop with a center turn lane and bike lanes.

Link’s proposal for the Rowe–Boulevard portion passed by 6–4 vote, with Dickerson and commissioners Allison Wright, Harry Sims and Andy Herod voting “no.”

Link said she intended for her changes to be funded with $40,000 earmarked to move the crosswalk in front of The Grit to the other side of Newton Street and add an overhead flashing beacon. Those improvements could be paid for by Homes Urban, the 100 Prince developer, which has offered to spend $250,000 on Prince Avenue.

But her motion did not include a funding source, leaving even ACC Attorney Bill Berryman confused about what to do. Manager Blaine Williams said he will bring a budget amendment to the commission for a vote next month.

• to approve a $575 million deal for Atlanta-based Piedmont Healthcare to take over Athens Regional Medical Center.

• keep Newton Street open, rather than close the block between Prince and Meigs to create an outdoor cafe area.

• remove $20 million to study and buy land for a new reservoir—opposed by environmental groups—from a 20-year water and sewer service delivery plan, replacing it with a more general line item on exploring new water sources.