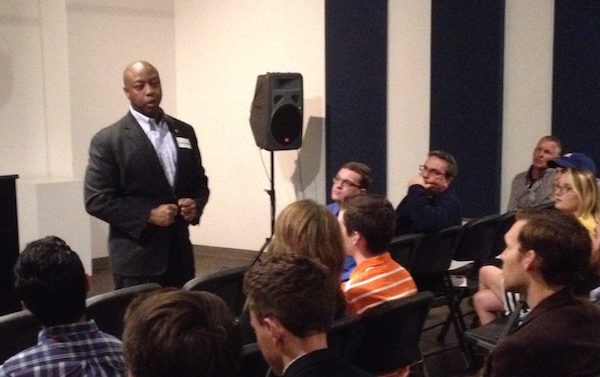 Athens might be Bernie Sanders country, but Republican presidential candidate Marco Rubio sent a prominent surrogate here today to round up votes for the Florida senator in Tuesday’s primary.

Scott, one of only two African Americans in the Senate, along with New Jersey Democrat Cory Booker, is a Charleston businessman and longtime local elected official who rode the tea party wave to the U.S. House in 2010 and was appointed to serve out Sen. Jim DeMint’s term in 2012, winning a special election in 2014.

His message: That Rubio is the only one of the five remaining Republican candidates who can beat frontrunner Donald Trump and “unite our party the way no other candidate can do.”

Trump currently leads in all but two of the 11 states that are holding primaries or caucuses Mar. 1. (Sen. Ted Cruz is winning his home state of Texas, and Rubio has a slight lead in Minnesota.) Georgia polls show Trump with about 35 percent of the vote, with Cruz and Rubio in the low 20s and vying for second place.

“I think [Rubio] wins a state or two on Tuesday, but there’s no question he has a path to the nomination even if he doesn’t win a state on Super Tuesday,” Scott said.

The field will narrow down to two or three candidates by the end of March, he said. “The closer we get to a two-man race, the better it is for Marco,” he said, because Trump has a ceiling of about 35 percent and the other candidates’ supporters will coalesce around Rubio.

Cruz, the other alternative, is “certainly conservative, but I don’t think he’s a unifying figure,” Scott said.

Scott declined to comment on a recent New York Times article reporting that Republican senators like Scott who are up for re-election this year would campaign against Trump if he’s the nominee. He did say, though, that he will support the GOP nominee in November.

Perhaps Rubio’s biggest weakness among conservatives is his since-repudiated support for a path to citizenship for people who came to the U.S. illegally. Scott vouched for Rubio as someone who “grew and matured” on that issue. “It’s a false statement” to say Rubio supports amnesty, Scott said.