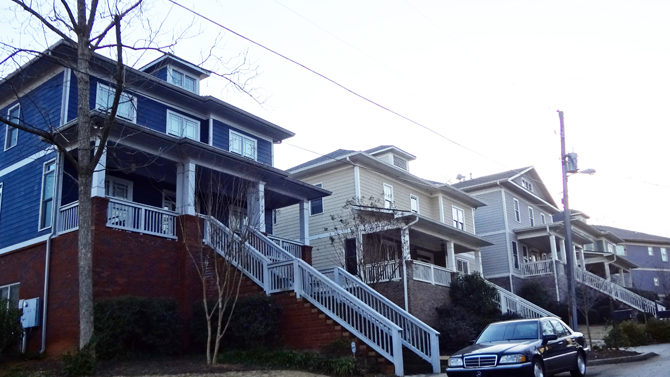 Most of the new construction in Athens is infill housing, like this on Easy Street, that’s far out of reach of most families.

Families with children are fleeing Athens to buy homes in surrounding counties because the housing stock here doesn’t meet their needs, according to a study commissioned by Athens-Clarke County in 2014 and released Tuesday.

The study examines “workforce housing”—housing for the 53,000 people in Athens whose households earn between 60 percent and 120 percent of the city’s median income, or about $30,000–$60,000 a year. This category includes a wide variety of blue- and white-collar jobs, such as maids, electricians, police officers, bank tellers, nurses, claims adjusters and graphic designers.

Vaughn Irons, CEO of consulting firm APD Solutions, who briefed commissioners on the study Tuesday night, described them as “people who get up and go to work every day, but there may be a mismatch between what the private sector provides and what they can afford.”

That appears to be because families are leaving Clarke County while retirees and childless couples are moving in. Only 22 percent of households in Clarke County include children; that figure is 43 percent in Oconee County. And it’s been trending that way for years, so it’s not just that Athens has a lot of college kids, according to Irons.

The exodus has cost Clarke County $800 million in payroll, Irons said. “You’re losing the people with higher incomes who are using your infrastructure and services,” he said.

APD surveyed 840 people in the “workforce” demographic and found that they have concerns about the affordability of homes, the proliferation of student housing, crime, public education and low-income housing (perceived to be government housing but often substandard privately owned rental housing). Affordability and the need for a larger home were the top reasons for leaving Clarke County.

“What we found is some of those would prefer to live here, but there are barriers to that housing choice,” Irons said.

Those surveyed like the access to services and amenities like restaurants in Clarke County. In particular, Five Points and the Prince Avenue corridor were cited as desirable neighborhoods.

“What your workforce wants is to be able to walk to things,” Irons said.

One issue is that very few single-family houses are being built in Clarke County. Only 116 permits were issued in 2014, compared to 293 in Oconee County, 380 in Barrow County and 455 in Jackson County. The median price of a newly built home in Clarke County is $338,000.

Overall, the average home price in Athens was about $172,000 last winter, up from $153,000 in 2013 and 72 percent higher than in 1995. Housing prices dipped during the recession but have almost reached the high point of the real-estate boom in the mid-aughts.

“Your workers want to be homeowners, but they feel affordability is a big barrier moving forward,” Irons said. Incomes are not keeping pace with housing costs, he said.

The rise is primarily driven by affluent retirees, Irons said—“halfbacks” who moved to Florida, discovered it’s too hot and moved halfway back home. “They have income, and they can afford to be in this community,” he said.

There is little in the way of rental housing for families, either. Of the 2,250 rental units built in the past 10 years, 89 percent were intended for students. Most of what’s available to families is “in pretty questionable condition,” Irons said.

“If you want new rental housing that’s not obsolete, you can’t find it because it’s not being built,” he said.

The study suggests a tax-abatement program to encourage owners of aging rental properties to fix them up or redevelop them.

Mayor Nancy Denson said she is appointing a committee to bring back more recommendations based on the study.

Avoid Sensory Overload at This ‘The Force Awakens’ Screening Saturday