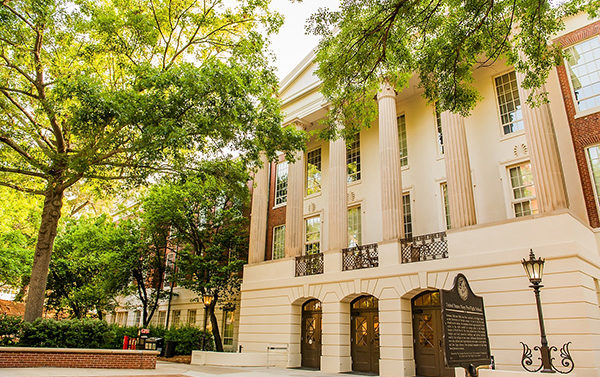 The University of Georgia’s Baldwin Hall expansion project has a grave problem—literally.

Work at the construction site has been suspended after 27 grave sites were discovered. The graves are believed to be a part of Old Athens Cemetery, also known as Jackson Street Cemetery, which was the official city cemetery for most of the 1800s. It was originally a part of UGA’s land grant and was deeded back to the university in 2004.

University officials had thought that all graves were removed and remains transferred to Oconee Hill Cemetery when Baldwin Hall was built in 1938, but that turned out not to be the case.

After authorities determined that the gravesite was not a crime scene and the remains are old, the case was turned over to the State Historic Preservation Office, assisted by the State Archaeologist’s Office, UGA anthropology students and consultant Southeastern Archaeological Services.

The remains will be removed and re-interred at a location yet to be determined.

The $8 million, 10,800 square-foot annex and renovations to the existing building were scheduled to be completed next September. The annex will include new classrooms, common space and space for graduate assistants to meet with students. Baldwin Hall houses the School of Public and International Affairs (where enrollment has tripled to 1,500 students since 2001) and the departments of sociology and anthropology.

Athens Power Rankings for the Week of Dec. 14