Mark Richt Is Stepping Down 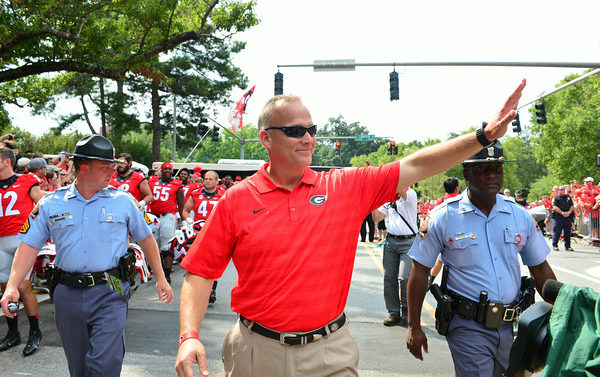 After another disappointing season, Mark Richt is resigning as the Bulldogs’ head coach, the university announced today.

Athletic director Greg McGarity said in a news release that he met with Richt this morning, and they “mutually agreed that he would step down as head coach and would have the opportunity to accept other duties and responsibilities at UGA following the bowl game.”

There has been speculation that, if Richt quit or was fired, he’d be in the running for head coaching jobs at his alma mater Miami or Florida State—where he got his coaching start under Bobby Bowden—should Jimbo Fisher move on. But President Jere Morehead also said he has asked Richt to “remain engaged with the institution in a new leadership role” related to UGA’s ongoing campaign to raise $1 billion for its endowment.

Richt said he will consider that opportunity, as well as “any other options that may present themselves in the future.”

Georgia will owe Richt a $4.1 million buyout for parting ways.

With a 144–51 record in 15 seasons, Richt has the highest winning percentage of any football coach in Georgia history. But he hasn’t won an SEC championship since 2005 despite consistently highly ranked recruiting classes and, although lauded as a Christian and a molder of men, he has developed a reputation of being “too nice to win the big one.”

This year, Georgia once again was considered a national title contender to start the year but limped to a 9–3 record. Yes, injuries played a role. However, the three loses included a blowout against Alabama at home and losses to arch-rival Florida and a rebuilding Tennessee, which prompted Flagpole columnist Cy Brown to join the #FireRicht choir. Recent wins over Auburn and Georgia Tech did seem to quiet down Richt’s critics, but apparently it wasn’t enough.

As for who might replace Richt, maybe UGA can rehire Mike Bobo. I also hear a certain visor-wearing ball coach is available.

On a serious note, Georgia is said to be interested in Alabama defensive coordinator Kirby Smart, who played for UGA, although Smart will be a leading candidate for several head-coaching vacancies.