Oconee Critic: ‘I Will Not Be Intimidated’ 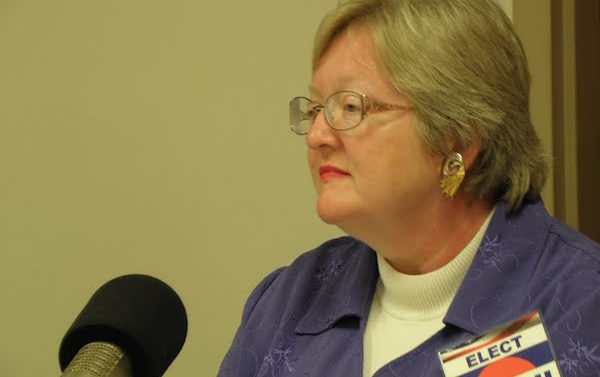 Sarah Bell, sporting a sticker from her run against Oconee County Commission Chairman Melvin Davis in 2012.

Oconee County Board of Commissioners Chairman Melvin Davis called the owner of the property where Sarah Bell plans to locate her We Care animal shelter one week after Special Master James Warnes dismissed Bell’s ethics complaint against Davis.

Davis inquired about the animal shelter, according to Debra Brown, who owns the land in the western part of the county where Bell is renovating a building for her We Care facility.

That same day, Oct. 23, Kathy Hayes, executive assistant to Davis, called B.R. White, director of code enforcement for Oconee County, asking about the status of a complaint the county had filed against Bell last January charging a violation of the county’s land use code.

White said that he told Hayes that the complaint had been dismissed. Records show that action took place on Sept. 11.

Property owner Brown said she told Davis that he needed to talk to Bell if he wanted to learn about We Care and its plans.

Davis didn’t call Bell, but Bell did respond on Oct. 27, when she used the citizen comment section of the Board of Commissioners meeting to say, “I want it to be on the record that I will not be intimidated.”

Athens Power Rankings for the Week of Nov. 9