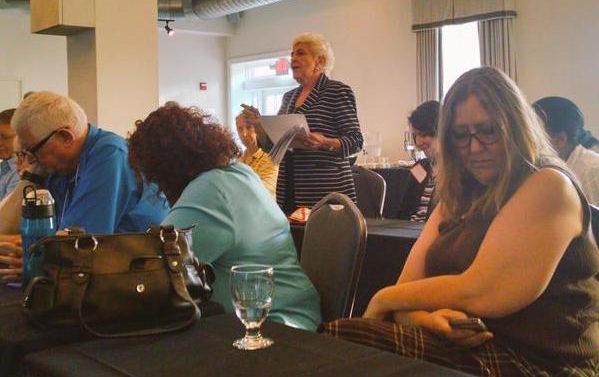 Mayor Nancy Denson “called out” fellow Democrats and commissioners at a meeting Thursday.

Mayor Nancy Denson caused a stir at a Clarke County Democratic Committee meeting Thursday night when she hijacked a panel discussion among three commissioners to read a statement defending her opposition to pond and wetland buffers.

At its regular monthly meeting, the CCDC hosted commissioners Kelly Girtz, Melissa Link and Jerry NeSmith for a discussion on buffers and other policy issues. The three voted in favor of stronger wetland protections last month, while Denson cast the tie-breaking vote to defeat them.

The mayor wasn’t intentionally excluded, according to CCDC Chairman Russell Edwards. “It never crossed our minds” that she would be upset about not being invited to speak, he said. “We thought we’d get three commissioners.”

As the discussion got underway, Denson (who is on the CCDC executive committee but rarely attends meetings) interrupted the conversation and said she was “here to call y’all out.”

Tim Denson, who ran against Nancy last year, documented the blowup on Twitter. “Can we continue?” he quoted Edwards as saying. “No, I’m reading this letter, unless y’all want me to leave,” Nancy replied.

I wasn’t there, but people who were described her as combative and rambling. Her performance was not well received; several audience members asked her to stop, and some walked out in disgust.

“Our leader made [in my opinion] a spectacle of herself,” NeSmith said.