Athens Congressman Jody Hice: There’s No Such Thing as Separation of Church and State 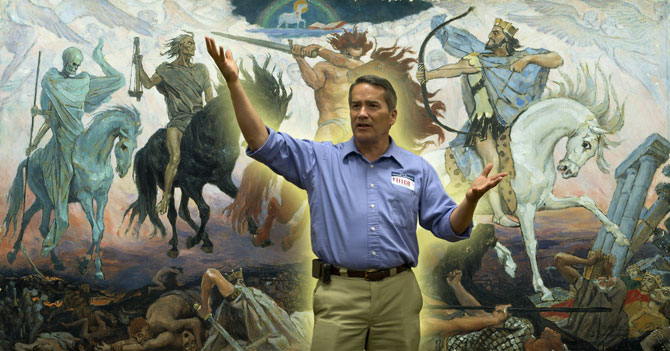 Jody Hice, the Walton County tea party Republican who represents Athens in Congress, told a San Diego Christian Conference that the “so-called separation of church and state” is a “false belief,” and that Christians staying out of government has made it more corrupt, the website Right Wing Watch reported.

According to another website, The Raw Story, Hice said:

“Somehow we have bought into that false belief that our Constitution forbids us from being involved because of the so-called separation of church and state,” the Georgia Republican said in a video prepared for the Future Conference in San Diego.”‘I’m sure you’re aware of the fact that that’s not in our constitution. But it’s been said so many times that many Christians believe that we ought not be involved.”

While the exact phrase “separation of church and state” is not used in the Constitution, Hice did not mention that Thomas Jefferson used it to explain the First Amendment’s stance guaranteeing freedom of religion.

Hice has made quite a name for himself among the religious right. He has urged local governments to post the Ten Commandments in public buildings, claimed that lunar eclipses are a sign of the Apocalypse, referred to border-crossing children as “invaders” and wrote lots of other nutty stuff in a 2012 book.

The Best Bets for Live Music in Athens This Weekend