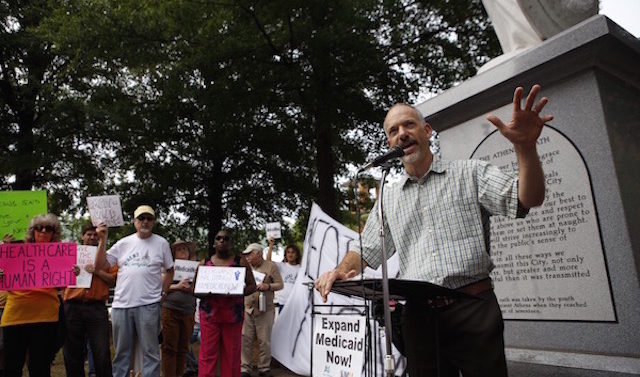 ACC Commissioner Kelly Girtz speaks at a rally for Medicaid expansion outside the Classic Center.

About 100–150 protesters were kicked out of the Classic Center during the Georgia Republican convention this afternoon as they waved signs and chanted slogans in favor of expanding Medicaid to an estimated 650,000 Georgians who lack health insurance.

The rally started outside at about 5 p.m. “There are people dying every single day just because we’re not expanding Medicaid,” said Tim Denson of Athens for Everyone.

Less than an hour earlier, Gov. Nathan Deal took the stage inside the convention, where he reiterated that Georgia cannot afford Medicaid expansion and criticized Affordable Care Act coverage mandates. (Deal recently said he’d be open to accepting funding to add people to Medicaid rolls if the state could run the program, though he refused to call it an expansion; and he recently signed a law mandating that insurance sold in Georgia cover autism.)

Deal also highlighted his criminal justice reform initiatives, which Athens-Clarke County Commissioner Kelly Girtz praised while speaking at the rally outside. But Medicaid expansion would help people before troubles hit, rather than after, he said.

Later, protesters marched up and down Thomas Street, then entered the Classic Center lobby, where they were confronted by delegates waiting to hear Texas Sen. Ted Cruz. They chanted “Save Georgia lives!” as Republicans sarcastically chanted “spend more cash,” according to Adam Lassila.

“We’re already paying for this through our federal tax dollars, but it’s only going to help people in other states under Deal, which is fiscally irresponsible,” he said.

Protesters were inside for about 10–15 minutes before Classic Center staff and police escorted them out, Lassila said.

Ted Cruz Wants to Repeal All the Things