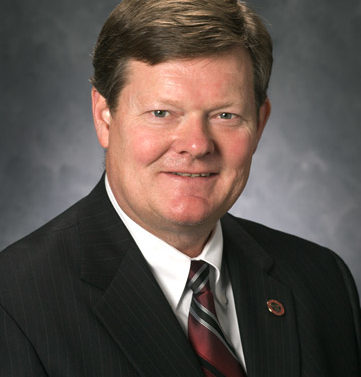 Tom Jackson, the University of Georgia’s longtime vice president for public affairs, is resigning Aug. 1 to take a position as “heritage communications executive.”

President Jere Morehead announced in a Friday afternoon news dump that he has appointed a search committee to seek a replacement, with the new title of vice president for communications and marketing. Vice President for Public Service and Outreach Jennifer Frum will chair the committee.

“Tom Jackson has played a strategic role in UGA’s senior administration for many years,” Morehead said in a news release. “He is the longest-serving member of the University Cabinet, having served admirably in several administrations. We appreciate Tom’s dedication and loyalty to UGA and wish him all the best in his new position with the University System.”

Jackson has been with UGA since 1988 and held his current post for nine years.

The news release included this description of the revamped position:

The Office of the Vice President for Marketing and Communications, currently known as Public Affairs, will serve as the chief communications and marketing organization for the University of Georgia and will be responsible for developing and strategically managing an organization that enhances, protects and strengthens UGA’s institutional brand and reputation.

This senior marketing and communications position is critical to advancing the university’s reputation as a leading national research institution and to ensuring the success of the university’s ongoing comprehensive campaign. The successful candidate should be an individual who possesses significant and long-standing experience and expertise in higher education and who has a strong background working with the various constituencies on a college campus. The vice president for marketing and communications will oversee four departments: news service, publications, broadcast/video/photography and the visitors center, as well as WUGA-FM.

In his new role, Jackson will lead special initiatives for the University System and be assigned to the Office of the Chancellor. Jackson’s initial focus will be to update an earlier history of the USG written by UGA Professor Cameron Fincher, provide leadership to the Georgia World War I Centennial Commission which was recently created by the Georgia General Assembly and work with UGA to expand the activities of the State History Museum, the State Archives and the Georgia Public Library Service.

“Heritage initiatives are a key part of an educated Georgia, and we have been looking for a way to focus our efforts in this area,” said (Chancellor Hank) Huckaby. “We are delighted that someone of Tom’s experience and education would be willing to tackle this assignment.”