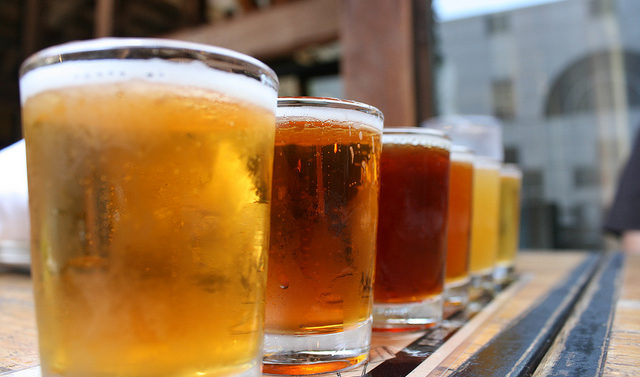 A watered-down version of Senate Bill 63, the “Beer Jobs Bill,” passed the Georgia House this afternoon. House members also voted down SB 139, which would have barred local governments from banning or regulating plastic bags and other disposable containers.

The House approved SB 63 142-9. Their version of the bill allows breweries to charge patrons for tours and let them to take home up to 72 ounces of beer (essentially, either a six-pack or a half-gallon growler).

Under the current system, breweries can give free tours that include free samples but cannot sell beer directly to the public. They often skirt the rules by selling souvenir glasses, but say that direct sales would allow more breweries to expand and flourish.

The Senate, however, approved a substitute bill that does not allow direct sales. Athens brewery Creature Comforts blasted Lt. Gov. Casey Cagle (who took $130,000 from alcohol middlemen during his re-election campaign last year) in a recent blog post.

When we became aware of this sub bill on the day of the vote, we were told we had to let it go and that we could not offer amendments or it would be “killed.” We were encouraged to say we appreciate the efforts of the committee to get something passed, and to keep being positive, because there is still a chance it can be amended on the Senate floor. We did sincerely appreciate the efforts,  and we shared that in hopes that the Senate floor would be less easily influenced and support our amendments.

On the day of the vote, SB63 supporters offered amendments to bring the sub bill back closer to the original SB63. After getting introduced, SB63 supporters in the Capitol that day (we were not there), shared a story of watching two of the highest ranking Senators approach the Lt. Gov bench.  The three had appeared to have a brief conversation and then apparently the two high ranking Senators went back to the floor and spoke with those who introduced the amendments. Then, all of a sudden the Senators who introduced some of them suddenly had a change of heart and pulled the amendments back off the table.

Creature Comforts says it no longer supports the current version of SB 63 because it won’t create jobs.

Cagle spokesman Ben Fry did not respond to a request for comment.

Because the House added a clause allowing distilleries to send a fifth of liquor home with tourgoers, as well, the bill now needs Senate approval again.

On the plastic bag ban ban, a group of Republicans split off and joined Democrats to defeat the bill 85–67.

Athens Mayor Nancy Denson had controversially lobbied legislators to pass it, fearing that the county commission would someday institute a small fee to get a plastic bag at the store to discourage their use, with the money going toward environmental cleanup.

Another bill that affects Athens—prohibiting state-owned buildings from seeking LEED green-building certification—won final passage in the Senate today. The just-opened University of Georgia veterinary hospital on College Station Road is LEED Gold, but under this law, UGA would no longer be able to seek LEED certification because LEED doesn’t recognize most Georgia lumber as sustainable.

An Athens Representative Asked GDOT for Documents, and They Wanted to Charge Her $100,000