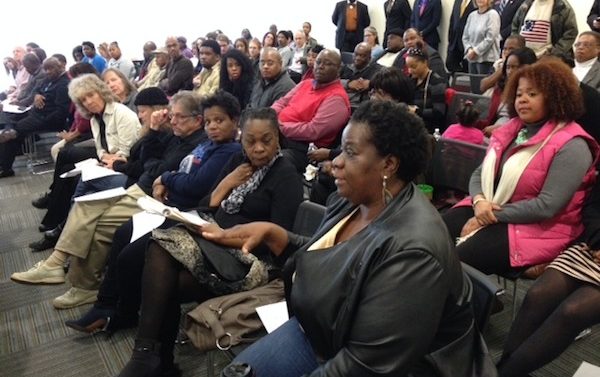 “Comply and complain” was the refrain police used over and over again during a town hall meeting with local law enforcement on Saturday.

A panel of community leaders briefly tackled a number of important issues—gentrification, low voter turnout, lack of minority representation in government—but in the wake of recent high-profile cases where police killed African Americans, the No.1 concern was the police department’s relationship with minorities.

Four police officers (three of them black) told the audience of more than 100 that, if they feel wronged, they should comply with the officer, then complain to superiors later.

“We need to know who it is,” said Athens-Clarke County Lt. Willie Brinkley. “We want to investigate what’s going on with this particular officer.”

However, citizens need to recognize that police usually have probable cause for stopping or pulling over someone, even if it’s just window tint, officers said.

“If you’re asked to step out of a car, surely there’s a reason,” Brinkley said. “If you don’t want to talk, we’re not just going to leave and go away.”

Several black audience members said they’ve been unfairly stopped or even had their doors broken down for no reason. African Americans feel singled out and asked to comply too often, and it’s “dehumanizing,” said Fenwick Broyard.

“I can see the frustration boiling up,” he said. “That’s when it goes wrong.”

If a suspect resists, officers are trained to use escalating levels of force, depending on the suspect’s actions, said Officer Kerel Heard.

“The offender chooses what level of force the officer uses,” he said.

If lethal force is needed, they’re trained to aim for the body and not try to wing someone in the leg, because they can’t hit it, Heard said.

Officers undergo bias training (on how to avoid racial profiling, though that’s not a term they use). The department makes a concerted effort to recruit minorities, Hunsinger said, but it’s difficult to find qualified applicants of any race. 88 percent of ACC police officers are white, he said.

“We don’t look at [whether the officer is black or white] because we’re all blue,” he said.

The forum at the ACC Library was sponsored by Alpha Phi Alpha fraternity, the Athens-Clarke County NAACP and the Athens Area Masonic Association.

Athens Power Rankings for the Week of Jan. 19