The Morton Theatre May Be Haunted 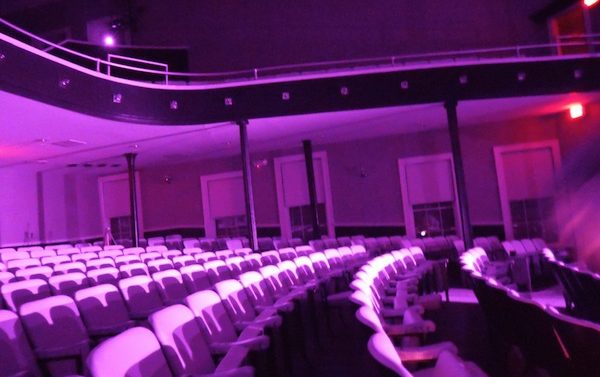 What’s that blur on the right?

When there’s something strange in the Morton Theatre, who you gonna call?

According to an Athens-Clarke County news release, “after hearing stories over the years about unexplained occurrences in the building, the Public Information Office (PIO) approached the Morton Theatre staff about telling the history of the building with a twist by hosting an overnight ghost hunt.” Because Jeff Montgomery ain’t scared of no ghosts.

Six investigators with Ghosts of Georgia and a Radar Productions videographer conducted an overnight investigation Oct. 11–12, setting up a variety of recording equipment and walking through the 104-year-old building. (This isn’t your tax dollars at work. The investigation was free, Montgomery said.)

They didn’t find Zuul, but they did write up a report about some potential paranormal activity:

We did get a few anomalies in our pictures. We captured a blue orb in the area where a witness had seen a blue light, a dark mass in a seat in the auditorium where a cold spot had been reported, and several green light anomalies that could not be explained. We did capture, on video, one of the rempods activating on stage with no one around. We did record numerous EVP’s, most of them were in response to our questions. The investigators had numerous personal experiences, some of the experiences verified some of the claims of activity, see below.

With the claims of activity, personal experiences by the investigators, the EVP’s that were recorded we feel like there is paranormal activity in the Morton Theater. We cannot say it is haunted without a follow up investigation to see if we can reproduce the claims of activity, personal experiences, and to gather more evidence of paranormal activity.

Among those personal experiences:

• “Something” the size of an adult person, a narrow light like the beam of a flashlight and loud banging noises.

• The sound of people walking across the stage.

• File cabinet drawers opening on their own.

But don’t worry, these ghosts aren’t the kind that will drive you to suicide or drag you through a portal to a hellish dimension or anything. “The Theatre feels great… really good energy and appears happy place and well balanced,” one investigator wrote. “No bad vibes in the theater.”

A half-hour video, Athens Ghost Hunt: The Morton Theatre, will air daily at 1, 5 and 9 a.m. and 1, 5 and 9 p.m. starting Friday through mid-December on ACTV, channel 180 on Charter and 13 on University Cablevision.

Watch a Clip From R.E.M. By MTV