Auburn Fan Claims He Was Spit on, Hit by Bottles in Athens 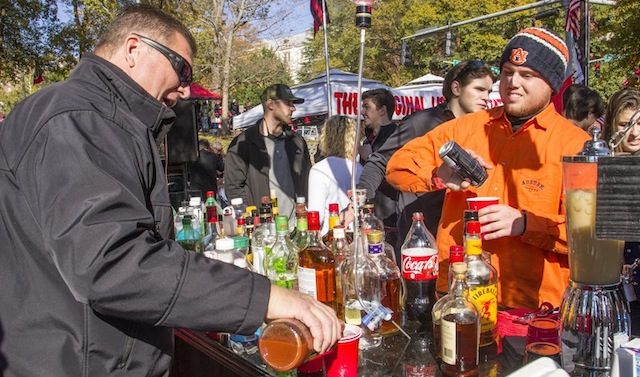 This is an anonymous Reddit post, so take it with a Big Gulp full of grains of salt, but a (purported) Auburn fan didn’t have a good time in Athens last weekend (if this person was even here at all).

First, it’s important to detail what actually happened. Let’s start with Friday night. We decided to go to a few bars in Athens, because Athens is certainly known for its bar scene. Note that for the most part we were dressed in neutral colors, although one of us had on an Auburn ball cap and a girl had on a blue scarf with orange trim. Before we entered the first bar we were boo’d. Okay, whatever, it’s a rivalry. But then it got taken too far. By the end of the night, I had two drinks thrown at me (and not by anyone I had talked to). The guy in the ball cap had a glass beer bottle thrown in his direction, and later realized he was bleeding. We were spat at (literally) and cussed out. Two of the girls were in tears, and one (the one with the scarf) was genuinely scared she would be assaulted. She got rid of the scarf because she was scared it was making her a target. It’s in some dumpster downtown now. We called it an early night and got the hell out of dodge.

So, Saturday. Okay, gametime. Maybe those were just drunks last night, and we had some bad luck. Who knows. Nope. Spat at. CONSTANTLY. I did NOT understand why grown men were literally spitting at me on a regular basis. It was insane. I lost count at 20. I had more drinks thrown at me (although this time it was soda, as we were in the stadium). Luckily I had a waterproof hood on my jacket, so that stayed up the rest of the game. Cussed out again. Leaving the stadium the guys in our group surrounded the girls, at their request, because they did not feel safe (and we left early, both because of the way the game was going and the way the fans were treating us). I was hit upside the back of my head a couple times walking out. I should mention that the girls were being called extremely vulgar things almost the entire game, as well as the night before.

Out of genuine fear for our own safety and well-being, we did not go out that night, but instead stayed at our host’s place.

I wouldn’t be surprised at all if a few idiots hassled this guy, but I seriously doubt this story is 100 percent true. It’s way too over the top. And why didn’t he ever talk to a bounce or a security guard or call the police?

Some of the hostile comments on the original Reddit thread, though, make me wonder.

Athens Power Rankings for the Week of Nov. 17