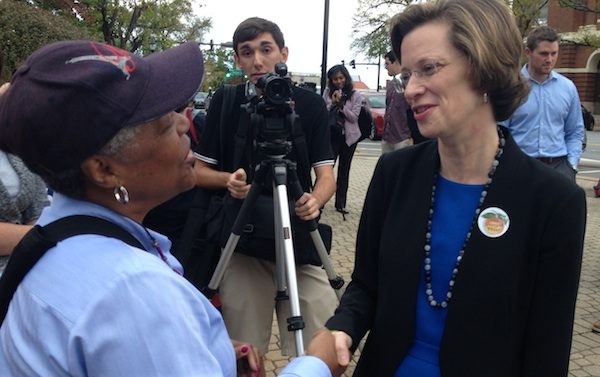 Democratic Senate candidate Michelle Nunn, after voting early in Adamsville, stopped by Athens City Hall this afternoon for a rally on her way to a fundraiser at The Hill.

Nunn touted a new poll giving her a slight lead over Republican nominee David Perdue and urged supporters to vote early. As she’s done throughout the campaign, Nunn contrasted her views on education and her background as a nonprofit executive with Perdue’s.

“I hope that we can do things in this election and as a senator that will actually affect people’s lives,” Nunn told about 75 supporters. “That’s why I’m doing this, and that’s why I think people are excited, whether it’s raising the minimum wage or whether it’s ensuring that all of our college students have an affordable pathway to college.

David Perdue has said he’s for eradicating the (federal) Department of Education. So if you just want to look at one specific contrast, one specific thing that would make a difference, that’s just for instance $1.1 billion worth of Pell grants that go to 400,000 Georgia students. That would mean eradication of those grants.”

(Perdue has actually said he favors returning that money to the states in the form of block grants.)

UPDATE: The Bworst UGA Football Tribute Songs of 2014 So Far