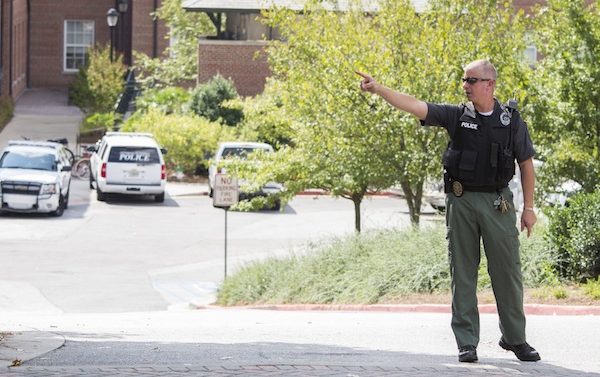 UPDATE 9:27 p.m.: UGA police said they have arrested student Ariel Omar Arias, 19, using information provided by a social media site and cell phone service provider. Arias confessed to making the threat, calling it an immature prank, and has been charged with two felony counts of making terroristic threats, in addition to being suspended from he university, police said.

UPDATE 2:54 p.m.: UGA Police Chief Jimmy Williamson confirmed that the threat was posted to a social media but would not say which one (we believe it was Yik Yak—see below). He also would not confirm reports that the message was, “If you want to live, don’t be at the MLC at 12:15,” but he said the message referenced firearms.

Several students who thought the threat was credible reported it UGAPD at about 11:35 a.m., Williamson said. “The biggest people we need to applaud are the students who took this as credible and alerted us,” he said.

Police positioned officers in the area, evacuated the Miller Learning Center and sent out alerts at 12:05, 12:08 and 12:52 p.m. They issued an “all clear” alert at 1:08 p.m. Williamson re-emphasized at the news conference that the area is now safe.

Williamson told several dozen reporters gathered at the Hodgson Oil building that the investigation is ongoing. He would not say whether police have a suspect. “I will tell you we are actively pursuing leads.”

Contrary to a WSB-TV report, classes at the MLC have not been canceled, UGA Vice President for Public Affairs Tom Jackson said.

UPDATE 1:18 p.m.: Police have given the “all clear.” Go about your business. Police Chief Jimmy Williamson has scheduled a 2 p.m. news conference.

12:33 p.m.: University of Georgia police are urging everyone to stay away from the Miller Learning Center due to a “threat of violence.”

UGA police texted an alert to students, faculty and staff just after noon: “Have threat of violence for MLC area at 12:15pm please stay out of area until you get the all clear.  Were telling everyone to vacate the area until you get another message showing the area is safe.”

According to several sources, the threat was posted to Yik Yak, an app that allows users to post messages anonymously. The threat apparently said, “If you want to live, don’t be at the MLC at 12:15.”

Eyewitnesses report that the MLC has been evacuated and Baxter and Lumpkin streets have been shut down. An ambulance and fire truck were spotted driving down Milledge Avenue toward the MLC. UGA’s bomb squad is also on the scene.

UGA’s website crashed after the alert was issued, but we’ll update this post as we learn more. It’s probably a hoax, but be careful—better safe than sorry.

Mike Mills, Others to Pay Tribute to Big Star on College Square Nov. 8