Is Caterpillar in Cahoots with Gov. Nathan Deal? 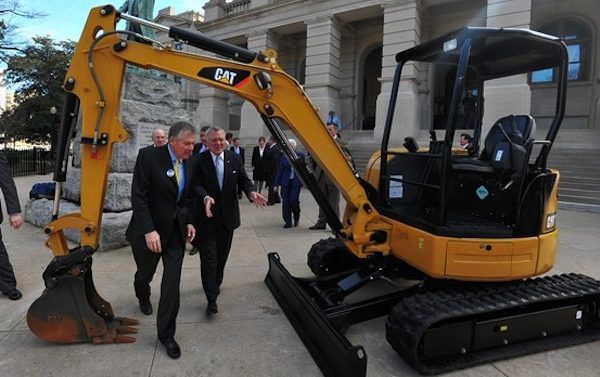 This is a month old, but in light of our recent feature on the progressive group better Georgia and the connection to Athens, it’s worth bringing up.

Gov. Nathan Deal has built his campaign around Georgia being ranked the No. 1 state to do business. But Better Georgia implies that Deal is using his political connections—including with Caterpillar CEO Doug Oberhelman, whom Deal gave $44 million in tax breaks to build a plant in Athens—to influence the rankings.

It turns out that CNBC used data from two politically aligned sources to create the rankings: the National Association of Manufacturers and the Council on Competitiveness.

And both of these groups have direct ties to Nathan Deal.

The chairman of the National Association of Manufacturers is also the CEO of Caterpillar, Inc., a corporation that received a $44 million tax break from Gov. Deal’s administration to open a new factory in Georgia.

And the chairman of the Council on Competitiveness is the CEO of John Deere, whose PAC has donated $10,100 to Nathan Deal’s campaign and at least $140,650 to Georgia Republicans since 2011.

So, both of these groups had a vested interest in seeing Gov. Deal and Georgia do well in the rankings.

The Atlanta Journal-Constitution got a response from Deal’s office.

In essence, Better Georgia outlined a conspiracy. A spokeswoman for CNBC this afternoon called the idea preposterous. The Deal campaign, also this afternoon, chose to respond with ridicule.

“Next stop is Time’s Person of the Year. We appreciate this group giving Georgia voters such a good laugh, to suggest that NBC is in the pocket of a Republican governor,” said Deal spokeswoman Jen Talber.

The Whigs Cancel GPB In-Studio After Pressure From #SaveWRAS