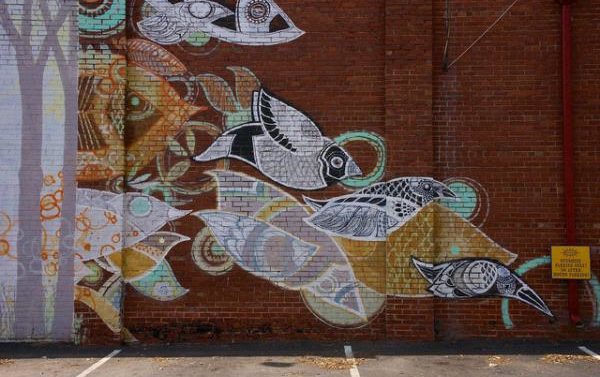 People are bummed that the mural on the side of the former Sunshine Cycles store on West Washington Street (it moved to Baxter Street in April) has been painted over.

Philanthropy—the Tennessee-based Christian women’s clothing store that is taking over the space—posted a message from landlord Corky Sams on Facebook explaining the decision:

We conferred with many people on what to with this building including the mural. We were not sure which Tenant had commissioned it or who the artist was. One of the Philanthropy owners talked about how much they liked it and how they posed if front of it many years ago with their children for a picture. We talked with architects, contractors, preservationist, friends, perspective Tenants, etc. and the consensus was that the mural was too far deteriorated and did not fit the historically correct look we were trying to achieve. It was faded, peeling, and had been tagged by gangs. Also, we were having to do masonry work in the middle of it.

Not sure about the “tagged by gangs” part.

Philanthropy also said that comments left on its Facebook page will be deleted and that the company is looking into commissioning a new mural.

The harshness of the comments made regarding our business and our move into the community actually do hurt – as we are not a large corporation and would never attempt to be – we are but a few individuals who are trying to do our absolute best for the communities and people around us that we serve. It was never our intention for this mural to be painted over – and as mentioned previously we are in the process of reaching out to the Artist and finding out if there is any way to have a new mural created.

If anyone knows who painted the mural (we think David Hale?) and when, please let us know in the comments.

UPDATE: Hale confirmed that he painted the mural and said he agrees with the decision to paint it over. “I want to make sure it is clear that I am not upset in any way about my mural being painted over, it was never intended to be permanent,” he told Flagpole news intern Stephanie Talmadge. “The new tenants there actually got in touch about me doing a new mural, which I am really excited about, that thing really needed some updating!”