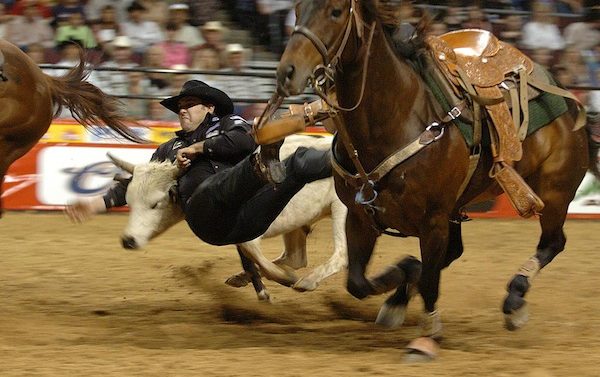 An off-duty Athens-Clarke County police officer had to pepper-spray a panicking crowd after a man was gored by a bull Sunday at an indoor rodeo at Athens Arena.

The officer was working security outside when he was summoned inside, according to a police report. He found “about 30 Hispanic males acting frantically inside the bull ring, all surrounding one Hispanic male [who] was laying on the ground appearing injured and a little bloody. I learned that the unknown injured man had been gored by a bull and was possibly badly injured.”

The injured man—whose identity was unknown—was not a bull rider, but “was drunk and decided to climb up onto the gate of the bull ring, even after being repeatedly instructed to get down by security, and fell into the ring while a bull was in the ring at the time,” the officer wrote.

The officer and two civilian security guards began trying to keep the crowd back and help the injured man, but the crowd, most of whom seemed intoxicated, kept trying to reach him, pushing each other and the guards, the report said. Because the crowd kept growing and some people appeared on the verge of fighting, the officer told them to move back, then sprayed “a few stream bursts” of pepper spray into the “disorderly crowd” when the command was ignored.

With the crowd subdued, the officer was able to move the injured man to a safer location and call an ambulance. People who were pepper sprayed were given water, according to the report, and the injured man was taken to the hospital.