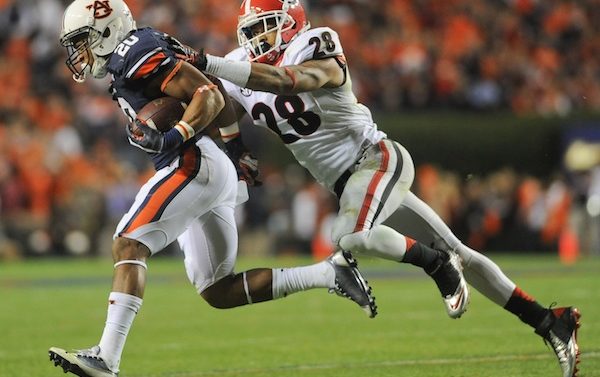 Tray Matthews may have tried to steal hundreds of dollars from the University of Georgia, but that’s not why he was kicked off the team. According to Matthews, it was because he talked too loud in class.

Matthews told the Atlanta Journal-Constitution that Coach Mark Richt dismissed him because of a “loud and distracting conversation with a fellow UGA athlete” on Tuesday in professor Ronald Bogue’s 3000-level children’s literature class.

The former Bulldog safety denied social media reports that he told Bogue to shut up and hurled obscenities at him.

“We were just going back and forth on something and then the teacher just basically said, ‘Y’all be quiet, y’all are always talking.’ And that’s the only thing that happened,” Matthews said. “And the teacher was just, ‘Get out,’ and I was like, ‘Sorry, he just keeps talking to me.’ I wasn’t disrespectful to the teacher at all.”

In March, Matthews was among four players arrested for double-dipping on their tuition checks, according to UGA police. The players cashed 11 $71.50 weekly checks using a mobile app, then cashed them again at a convenience store, police said. They are charged with theft by deception.

Matthews is considering transferring to the University of Louisville, where he’d rejoin fellow defensive back Josh Harvey-Clemons—who was kicked off the Bulldogs in February after he was caught smoking pot for the second time—and former UGA defensive coordinator Todd Grantham.