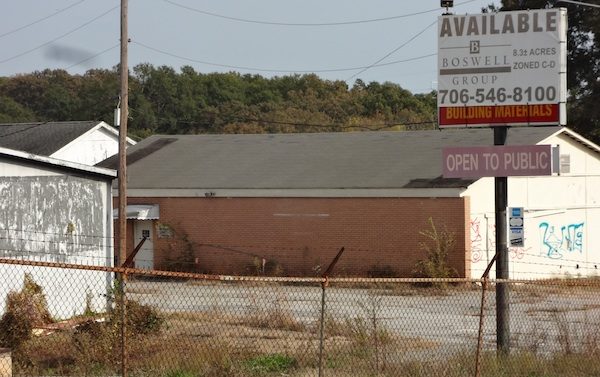 
The Armstrong & Dobbs property as seen from Oconee Street.

Athens-based student-housing developers Landmark Properties is in the process of buying at least part of the former Armstrong & Dobbs property near downtown Athens.

The eight-acre property, once a building supply company, near the corner of Oconee and East Broad streets has continued to sit vacant since Selig Enterprises of Atlanta abandoned controversial plans to develop a massive complex of apartments and retail stores.

Landmark Properties now has the Armstrong & Dobbs site under contract. Selig is a minority partner in the new project, Landmark CEO Wes Rogers said. “We feel like they understand retail well,” he said.

After winning Athens-Clarke County Commission approval last July, Selig canceled its project in November, citing changes in the marketplace since it was proposed in late 2012, as well as difficulty securing financing.

Rogers, however, said he believes there is still room for more student housing downtown that’s within walking distance of campus and nightlife. The Standard, another Landmark project under construction at the corner of North Avenue and Thomas Street, is already 100 percent pre-leased for fall, he said.

A rendering of The Standard.

Rogers said the development at Armstrong & Dobbs would be comparable to The Standard, with four or five stories of student-oriented apartments above ground-floor retail with brick and stone architecture wrapped around a hidden parking deck.

But detailed plans won’t be filed with ACC for 30–60 days. “We’re still kind of working through those details,” he said.

Rogers said the new development won’t take up the entire Armstrong & Dobbs parcel and will be smaller and less dense than what Selig proposed. (In its final version, the Selig plans included about 100,000 square feet of commercial space, 375 apartments and 1,400 parking spaces.)

Unlike Selig, Landmark does not intend to seek a variance or a rezoning, so neither the ACC Commission nor citizens would have any say in how it is developed as long as it meets local zoning laws, which allow up to 200 bedrooms per acre downtown.

“We intend to develop it according to the existing code,” Rogers said.

That decision had more to do with Landmark’s success with developments like The Standard that meet the ACC code than with vocal opposition to Selig, he said.

And now, the $64,000 question, for many Athens residents: Will there be a Walmart?

“I was born here. I want to be a good steward of the community,” Rogers said. “We currently have no intention of putting a Walmart in the site in spite of [Walmart’s] interest in doing so.”

He said his company is in talks with other retail tenants, but he could not reveal them due to confidentiality agreements.

Tonight in Athens: Outer Spaces, Nether Powers, A Night at the Morton