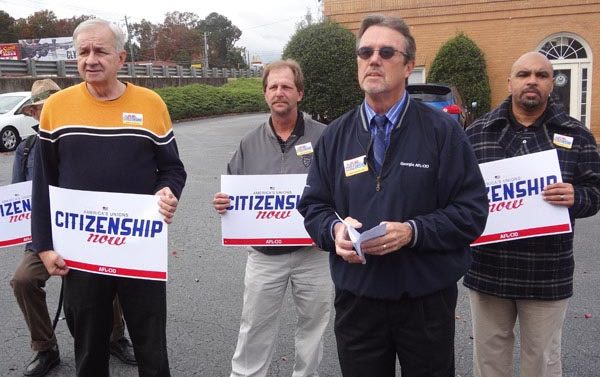 “Illegal aliens are criminals, and we need to treat them as such,” Broun is quoted as saying in the ad.

Charlie Fleming, president of the union’s Georgia chapter, called immigration reform with a path to citizenship the labor movement’s highest priority. Most undocumented people are “hardworking folks, many of whom were brought over as children,” but Republicans are demonizing them and blocking reform, he said.

“Republicans are standing in the way of the American Dream,” Fleming said.

“We know the votes are there to pass it,” he said. “Call him out on holding it back.”

In addition, language like Broun’s has contributed to harmful policies like the Board of Regents’ ban on undocumented students attending the University of Georgia and other top public colleges, said Pamela Voekel, a professor who is involved with Freedom University, which offers free online classes for those barred from UGA.

“This kind of rhetoric and this kind of demonization is precisely why we have such embarrassing legislation,” Voekel said.

The ad will air in Spanish in Atlanta, Denver, Orlando, FL and Bakersfield, CA, and in English in Washington, D.C. for the next couple of weeks, Georgia AFL-CIO Communications Director DeLane Adams said.