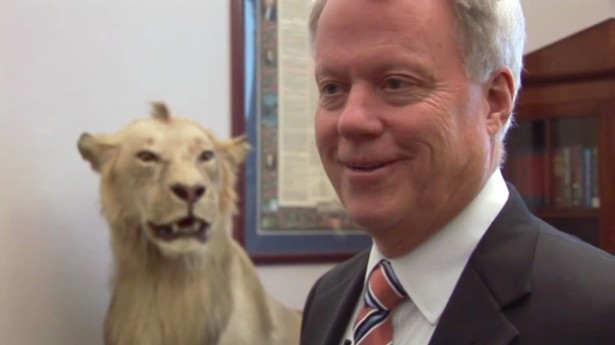 Last week, The New Yorker‘s Ryan Lizza wrote about 80 Republican congressmen who forced House Speaker John Boehner into the politically disastrous course of demanding the repeal of the Affordable Care Act or else shutting down the government. Conservative commentator Charles Krauthammer dubbed them “the suicide caucus.”

Robert Costa of the National Review later identified “30 to 40 true hardliners” and 50 or 60 other GOP congressmen who are going along with the hardliners.

They don’t face consequences for taking these hardline positions. When you hear members talk candidly about their biggest victory, it wasn’t winning the House in 2010. It was winning the state legislatures in 2010 because they were able to redraw their districts so they had many more conservative voters. The members get heat from the press but they don’t get heat from back home.

Gawker took it one step further, naming 10 “hardliners of the hardliners,” including two Georgia representatives, Paul Broun (R-Athens) and Phil Gingrey (R-Marietta). Both just so happen to be running for Senate. And you might as well add Rep. Tom Graves (R-Ranger) to the list.

To recap: In 2010, the tea party wave not only swept the GOP into power in the U.S. House, but also governorships and legislatures in swing and Democratic-leaning states like Ohio, Michigan, Wisconsin, Maine and Virginia. That was a Census year, so the newly-Republican state governments had the opportunity to draw congressional districts to consolidate their power. In those safe GOP districts, tea party congressmen not only face no consequences for drifting too far to the right, they are under far more threat from a primary challenger than a Democrat. (In Broun’s 10th District, for example, only 36 percent of voters supported President Obama, in spite of the presence of liberal Athens.) Not only are their views extreme, they have the ability to bully Boehner and the other remaining mainstream Republicans with the threat that the tea party will deem them insufficiently conservative.

Keep in mind that folks like Broun and (at least lately) Gingrey don’t think the federal government should do anything other than fight wars and deliver letters. So if it’s shut down, hey, that’s what they wanted in the first place.

Thus the Obamacare-will-destroy-America drumbeat and the government shutdown. And it’s not over. Just wait for the debt ceiling fight.