Opposition to Selig Is Growing 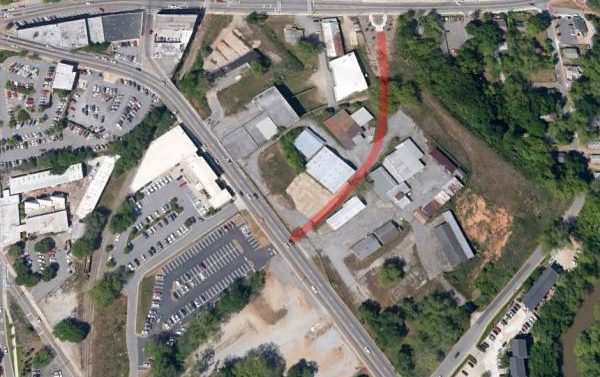 Local activists are hard at work organizing last minute opposition to the downtown Selig development based on former commissioner Carl Jordan’s revelations about an old rail spur through the Armstrong & Dobbs property.

But it looks like the Athens-Clarke County Commission is moving full speed ahead on rubber-stamping the development Tuesday night.

Commissioner Kelly Girtz says he will propose a change to Selig’s plan that will provide a series of connections linking the development to the University of Georgia campus across Oconee Street. The question remains, though, can the commission do this without changing a map that marks protected future transportation corridors and specifically lists the rail spur as a level connection from Firefly Trail to UGA? County officials say yes, but a lot of others say no.

Melissa Link forwarded the following correspondence with Girtz in which they debate the merits of his plan. It’s a bit wonky but well worth wading through to understand the issue. Link:

I’ve already had long conversations and email exchanges with most of you regarding Selig Enterprises’ blatant violation of ACC code and procedure in their configuration of a combined Hickory St/Rail-Trail cut-through the Armstrong & Dobbs property. I believe Planning made an egregious error in approving this interpretation of the concept outlined on the Future Transportation Corridor Concepts map and it will greatly reduce the possibility of the concept of a through, level connection to UGA ever being achieved.

If this plan is to go forward as-is, the TCC map must be amended via proper processes (TCCCODE). And this configuration should only be amended with assurance from UGA that the full concept will be completed. This binding site plan is essentially functioning as a variance to violate Sec. 9-26 of ACC code regarding right-of-way dedication and TCC adherence, as well as Compete Streets Policy deviations. That the Hickory St. cut-through is to be dedicated property of Selig Enterprises is further violation of this code. If this plan moves forward as-is without such amendments and assurances, I have been advised that there is clear grounds for legal action against ACC.

Selig’s plan for 1500 parking spaces, 900 bedrooms, and several large retail & restaurant spaces can be achieved with a viable alternative combined Hickory St./rail-trail corridor that connects E. Broad & Oconee with a gentle arc parallel to that portrayed on the TCC map at an elevation difference of only 4 ft. (see MAPTCCalternative & MAPselilgTOPO), an elevated boardwalk-style bike-ped parallel here could elminate the grade altogether. This alternative map was drawn by a planning professional. This would cross Oconee along the eastern edge of the Hodgson Oil building to use the existing parking lot driveway area as right-of-way and continue on to the Thomas/Mitchell intersection at a level grade to accommodate a direct connection to campus for cars, buses, bikes and pedestrians. This would only necessitate about 250 feet of additional paved road and right-of-way from a single property owner with no demolition of existing structures required.

This alternative interpretation of the TCC would additionally allow for increased property valuations as the Hodgson oil property’s new street frontage would accommodate additional development at the back end. Additionally, development of the 3 extremely valuable properties currently laying fallow to accommodate the Hickory St. corridor as portrayed on the TCC map would now be possible. In addition to extremely serious traffic concerns, there is a clear economic imperative to assure that this corridor is completed via a concept that much more closely adheres to the TCC.

Adherence to the adopted TCC map is an important tool in ensuring the healthy growth of our community–I urge those of you who have the power to enforce it to do so. I hope you will seriously consider this viable code-appropriate alternative, share it far and wide, and do what you can to encourage Selig to consider this possibility so that Athens’ citizens do not have to consider legal action to preserve the adopted codes and procedures of our local government. Selig does not make their email contact info public on their website, so I ask those of you who have been in communication with them to pass this info along.

Then Mark Ralston, who is involved with the Firefly Trail, weighed in:

Melissa makes many points in her message that concern me, and many suggestions with which I agree. I hope you will study every word she has written and take to heart her concerns about the planning process. With a little more work, the Selig development could bring huge benefits to downtown and to UGA, but without a level, bike/ped/bus-friendly connector to North Campus, it will be just another car-centric student housing project that clogs our streets and makes it even harder to do business downtown.

Melissa is mistaken in her read of the TCC.  As I mentioned in the earlier email, it indicates general routing for projects, but does not mandate specific coordinates or elevations for routing.  As much as we might wish to, we cannot anticipate specific routing of the corridor that will move through the UGA campus and adjacent property.  In the long run, my preferred solution is a series of routes linking Oconee Street with campus (perhaps one in line with Hickory Ext for vehicular traffic, one alongside the Hodgson Oil Building for ped/bikes, and even a third in line with Fulton Street), for the purposes of traffic dispursement and creation of smaller block-lengths.  However, any paths heading toward Mitchell/Thomas across from the A+D/Selig site basically hit the back of the Jackson Street deck, so their end points would be less functional than anyone would prefer, given that any route would fall short of (and below) the edge of North Campus.

Then Link unloaded on Girtz:

It baffles me as to why you are bending over backwards to accommodate a plan that clearly deviates from the concept of two separate corridors connecting on level grade into campus when there is a clear code-mandated tool to make this a better project. Especially when there are other viable alternatives to ensure the TCC concept can be fully achieved. Does this community not deserve the best possible project our adopted policies & codes can encourage?

At the very least, this configuration must go before hearings board as per ACC Code 9-29-5 B:

“The hearings board may modify the location of a required transportation corridor right-of-way dedication to account for practical difficulties in implementing this title, as long as the general intent of providing safe transportation from one point to another is ensured.”

Your piddling requirements do not solve the corridor completion issue. This is part of a corridor–NOT a cut-through and bike lanes separated by parked cars are NOT a rail-trail. This is still a drastic reinterpretation of the TCC & demands a map amendment. The agenda report states that Selig’s Hickory St is meant to serve the purpose of both the TCC Hickory St & rail-trail, but ACC has not amended the TCC map to ensure right-of-way to complete the corridor. At the very least, a binding agreement must be made w/ UGA to complete the corridor w/in a certain time frame. Your option also does not address concerns about Selig Enterprises plans to function as private owners of a public road that the TCC mandates as a portion of a public corridor. This issue is also extremely troubling.

Your capitulation to the whims of a corporation that has continually ignored and ridiculed concerns from this community will not bode well for you at the ballot box…. This is not about those big, ugly buildings, but for the thousands of Athenians sitting stuck in traffic in their shadows every day, those big, ugly buildings will be a constantly looming reminder of who let this happen…. It is extremely troubling that you would sell out the serious concerns of so many of your most civicly dedicated constituents so this carpetbagging corporation can squeeze a couple dozen more parking spaces out of a project from which very few actual voters will benefit.

There is more to come, I’m sure.