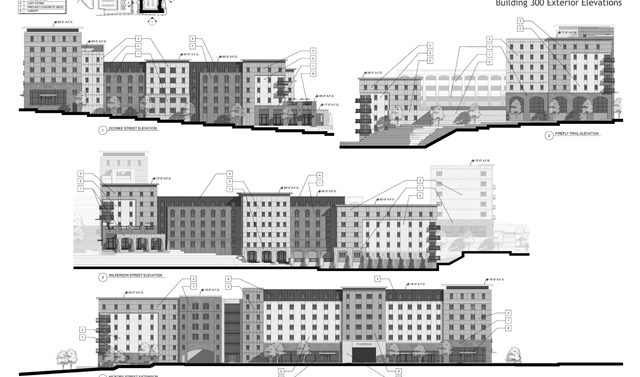 The planning commission recommended that the county commission approve a special use permit allowing Selig to build 15 residential units on the ground floor, where ACC requires commercial space in downtown developments. The county commission is scheduled to vote Tuesday, July 2.

About 20 people spoke out against the development, mainly complaining that, with 100,000 square feet of commercial space, 375 apartments and 1,485 parking spaces in two hidden decks, it’s too big and too auto-centric.

John Tankard, a University of Georgia College of Environment and Design graduate student who is working on the downtown master plan, criticized the project’s design. It doesn’t reflect the way downtown has grown organically with a variety of architectural styles, he said.

“I think we need to tighten up our zoning rules so we can have the Athens we want,” Jerry Daniel said. “This is not Atlanta. We don’t want it to be Atlanta. But this is an Atlanta-style development.”

Several speakers accused Selig of greed and said the Atlanta company should come back with a smaller-scale design that fits better in Athens.

“If they really want to do the right thing, not pretend, let them come back with something different,” Barry Irwin said.

All those issues are immaterial, though, said Selig’s Athens attorney, Mike Morris. Building residential, rather than commercial, space on the ground floor of one building fronting part of Wilkerson Street and the future Firefly Trail will improve the development by avoiding the risk of unviable commercial space, keeping more eyes on the greenway and preventing traffic congestion on Wilkerson, he said.

“When we separated out the emotions, some of the things were very valid,” she said.

If the request was tabled now, Morris said Selig would rethink its application for a special use permit and build by right, meaning ACC would have no control over the development as long as it met the zoning code—which could mean twice as many apartments and even more parking.

“Those 15 units make a heck of a lot better project than what could be built under our current zoning,” Athens Area Chamber of Commerce President Doc Eldridge said.

Planning commissioners said they dislike a lot of aspects of the projects, but they felt they had little choice but to approve the special use request.

“We’re actually getting a better project and a few nifty perks that we won’t get if we don’t take it,” Chairman Paul Dellaria said. “Because they can build this by right. They don’t need us.”