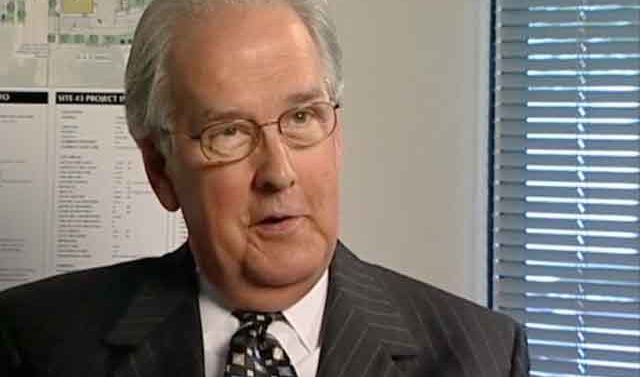 Former University of Georgia President Charles Knapp is coming back to UGA.

Incoming President Jere Morehead named Knapp interim dean of the Terry College of Business today, replacing Robert Sumichrast, who is leaving for a similar position at Virginia Tech. Knapp, who preceded Michael Adams, will serve for one year while a permanent replacement is sought.

Knapp’s appointment, announced by UGA senior vice president for academic affairs and provost Jere Morehead, is from July 1, 2013, through June 30, 2014.

“I am thrilled that Dr. Knapp has agreed to lead the Terry College of Business as it continues its Building Terry capital campaign and its rise toward national prominence,” Morehead said. “His record of leadership in higher education and his strong ties to the business community will position the Terry College for continued success in the coming year.”

Knapp served as president of the university from 1987 to 1997, a tenure in which the academic reputation of the university rose dramatically. More than $400 million of new construction was completed, as was a successful capital campaign. He worked closely with then Georgia Gov. Zell Miller on the establishment of the HOPE Scholarship program, which has since provided $6 billion in financial aid to more than 1.5 million Georgia postsecondary education students.

He joined the board of directors of Aflac Inc. in 1990 and currently chairs the investment committee and is a member of the audit committee. From 2005 to 2011, he was the chairman of the board of the East Lake Foundation, the organization responsible for the highly successful community redevelopment project in southeast Atlanta. In 2013, he was appointed by Gov. Nathan Deal as a member of the State Charter Schools Commission and has subsequently been elected as the chair of the commission. Knapp also is a member of the boards of the Georgia Early Education Alliance for Ready Students, the National Commission on Teaching and America’s Future, and the Wormsloe Foundation.

“I’m very pleased to have this opportunity to provide leadership to the Terry College for the next year,” Knapp said. “I look forward to working together with the faculty, staff, students and alumni of the college as we address important issues, particularly maintaining the strong momentum of fundraising for the new Terry College facilities. I wish to particularly express my appreciation to President-elect Morehead for offering me this additional chance to be of service to the University of Georgia.”

Knapp was president of the Aspen Institute, an educational and policy studies organization based in Washington, D.C., from 1997 to 1999. He previously was the chair of the National Association of State Universities and Land-Grant Colleges. He was a partner with the executive search firm Heidrick and Struggles from 2000 to 2004. In 2005, he joined the UGA Institute of Higher Education, where he directs the Executive Doctor of Education Program in Higher Education.

In 2006, Knapp was named chairman of the Commission on the Skills of the American Workforce. Members of the bipartisan commission included former governors, senators, cabinet secretaries, business and labor leaders, civil rights leaders, and education and job training experts. The report of the commission, “Tough Choices or Tough Times,” has helped inform the national debate on the future of education and training policy in America.

Knapp received his bachelor’s degree, with honors and distinction, from Iowa State University. He earned his master’s degree and doctorate in economics from the University of Wisconsin-Madison. He is a recipient of the Iowa State Distinguished Achievement Citation, the university’s highest alumni award, and the Abraham Baldwin Award for distinguished service from UGA.

A national search to name the successor to Terry College Dean Robert Sumichrast was halted earlier this month. Morehead said UGA will begin a new search for a permanent dean in the fall.

“I want to thank the search committee and all the faculty, staff, students and alumni who went to great lengths to become familiar with the candidates and met the three finalists during their campus visits,” Morehead said. “I am also grateful to the dean candidates who committed the time to explore this very demanding and rewarding opportunity. A new search will launch during fall semester, and I can say without reservation that the Terry College is in good hands with Dr. Knapp serving as interim dean.”

Founded in 1912 as the School of Commerce, the Terry College is the flagship business school in the state of Georgia and the oldest in the South. It enrolls more than 3,200 students in undergraduate, master’s and doctoral programs in Athens and at UGA campuses in Atlanta, Gwinnett and Griffin. It includes seven academic departments and offers executive programs as well as certificate programs in actuarial science, leadership advancement, legal studies and music business. Its programs, including the J.M. Tull School of Accounting, Master of Marketing Research, and Risk Management and Insurance Program, consistently rank among the top in the nation. The Terry College has more than 140 faculty members as well as units such as the Selig Center for Economic Growth that are engaged in research and outreach that strengthen the business community in Georgia and beyond.

So when Adams retires and takes up his professorship, there will be three presidents on the UGA campus.