Does Downtown Need Another Parking Deck? 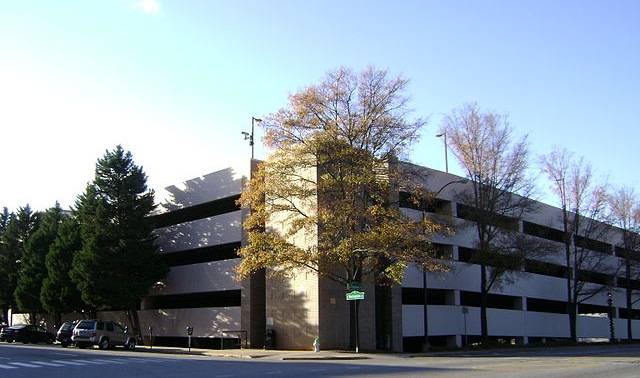 Most everybody seems pretty cool with the downtown master plan so far—at least those who showed up to a public hearing Thursday night.

The town hall meeting drew about 150 people to the Classic Center, a little over half the number who attended a similar meeting in November. And it wasn’t a very diverse audience. But those who did turn out largely approved of the work UGA professor Jack Crowley and his crew of graduate assistants have done.

Some of the ideas Crowley floated we’ve heard before. Others were new, like a plan for offices and apartments wrapped around a new parking deck on the surface lot behind the federal building (prompted one wag to propose selling “I Love Big Decks” T-shirts to raise money).

While it might seem silly to build a new deck just a year after the half-full West Washington Street deck opened, Crowley pointed out that 2,000 additional people will be moving into new downtown apartments soon (though they’ll have their own decks) and the Classic Center needs an additional 500 spaces since it expanded.

“They can be very intimate urban spaces—small retail, small pubs, things like that,” he said.

One thing that’s not an option, though, is closing College Square to cars. It wasn’t in the plan shown Thursday. “That’s a dicey issue,” Crowley said. He did recommend removing one lane to widen the sidewalk on The Grill’s side of the street and said a new pocket park and plaza on the City Hall block could serve the same function as a pedestrians-only College Square.

Under Crowley’s plan, one lane on Washington Street would also be converted to a sidewalk.

More than 80 percent of attendees told Crowley he was on the right track on each of four key components: light rail through the UGA campus, the plan for pedestrian and bike traffic, the plan for vehicular traffic and the City Hall park.

Passenger trains on the Norfolk-Southern line were the most popular idea with 94 percent approval but seems the least likely to happen. The price tag is $70 million to $80 million and Crowley wants the state Department of Transportation to pick it up. That seems unlikely at best, given GDOT’s lack of cash, focus on metro Atlanta and disinterest in rail.

Crowley said the final plan will be submitted to the steering committee in June. From there, it would go to the Athens Downtown Development Authority, then the ACC Planning Commission and finally the ACC Commission for adoption.