ACC Can Compost Your Food Scraps and More 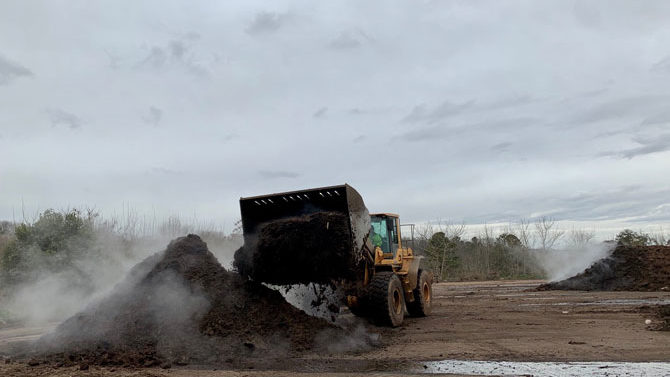 The Athens-Clarke County Landfill hosts one of only four commercial composting facilities in Georgia. Last year, the composting operation at the landfill adopted a new system that processes compost up to twice as quickly as before. This, along with recent policy changes, means commercial composting is more accessible than ever to both businesses and individuals. In some cases, composting and recycling will become the new norm instead of landfilling.

Composting is the natural process of breaking down organic matter into usable soil. With the right balance of ingredients and airflow, microorganisms will happily feast away inside the compost pile, generating a lot of heat. Compost staff carefully monitor temperatures throughout the process to ensure the ideal environment for the helpful bacteria and fungi. The generated compost is a valuable commodity that can be used to improve soil.

According to Environmental Protection Agency estimates, in 2017 food was the No. 1 single source of waste in our nation’s landfills. Many people still think that they’re doing the right thing by using biodegradable products, even when they put them in the trash, says Mason Towe, education specialist for the ACC Recycling Division. In reality, quite the opposite is true. When you throw something away, it gets buried in a plastic-lined mountain (the landfill) that has been designed to never break down. When food and other organic materials decompose in this compacted, airless environment, they generate methane, a potent greenhouse gas that contributes to climate change.

The landfill has a system that collects methane and burns it to generate electricity, but this doesn’t solve the problem of wasted food, which is a topic that deserves an article of its own. Considering one in five Athens residents are food insecure—meaning they have inconsistent access to nutritious food—work remains to be done reducing food waste long before it reaches the landfill.

Even if we make sure that all of the edible parts of our food get eaten, that still leaves us with scraps—think banana peels, eggshells and coffee grounds. Food scraps make up just one aspect of a good composting system. The ACC commercial composting facility processes anything that used to be alive, including leaf and limb debris, dirty paper products, certified biodegradable products and biosolids from the water reclamation facilities. If you are purchasing compost, which is for sale by the cubic yard or the bucket load, but feeling skittish about contaminants, rest assured that each batch of compost is thoroughly tested and documented against strict standards for pathogens and trace metals. The EPA says biosolids (treated and sanitized human waste) are safe, but for those who feel uncomfortable, ACC offers a blend without them as well.

Residents can drop off food scraps and compostable products for free at the Center for Hard to Recycle Materials (CHaRM) at 1005 College Ave., the Solid Waste Department office at 725 Hancock Industrial Way or the landfill at 5700 Lexington Road. ACC also has a pilot commercial collection program, which will soon transition into its public phase. Let Us Compost, which for seven years offered Athens’ only commercial food scraps collection, closed in December. In a Facebook post announcing its closure, founder Kristen Baskin thanked the community for turning composting from something unusual into the new norm. Another local business, Awesome Possum Composting, still offers curbside collection.

In December, the ACC Mayor and Commission voted to approve new legislation that will require large public events to be effectively zero waste. These events—such as the Twilight Criterium, AthFest, the Hot Corner Festival and others held on public property with more than one food vendor—will now be required to use only recyclable and/or compostable containers, with an exception for pre-packaged foods like candy bars or chips.

The next time you’re at an event or one of many local restaurants now switching to compostables, pay attention to what kind of container your food comes in. If it says “compostable” or is made of paper—with the exception of wax paper cups—be sure it goes in the composting bin. If it is a recyclable container, such as hard plastics Nos.1–7, it must be washed first, then can be placed in the recycling bin. The ACC website has an updated list of recyclable items.