Save the Clayton Street Trees 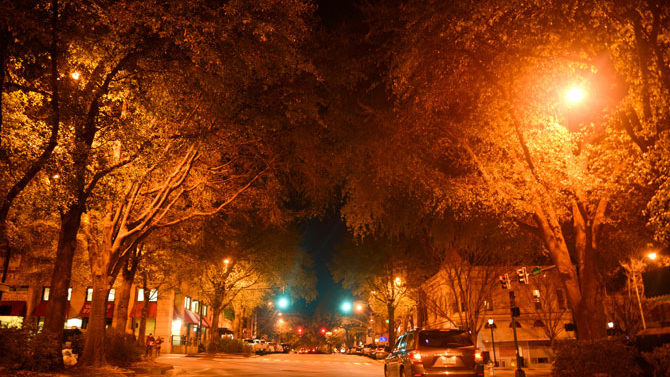 This is an open letter to the new mayor and commissioners. I read an article in the Dec. 26 issue of Flagpole about how the future administration was looking at our energy issues and had hopes of joining other cities across America to become more energy efficient and developing sustainable energy for Athens-Clarke County. It was mentioned briefly that the mayor-elect wanted to increase the canopy of trees in the county.

Great! Now, let us consider that the city has chosen to cut down all the trees on Clayton Street as they plan a major overhaul of the street’s infrastructure and create a new look and layout. Does anyone see a total disconnect here with the reality of what the ACC government says and what it plans to do?

To many, Clayton Street helps to define Athens. It is the street on which students and alumni meander as they show their friends and families the city. Most of the music venues that have made a name for Athens are on or near Clayton. The Christmas parade is held on Clayton, and the large oaks are festooned with lights. It is beautiful in the winter to see this bit of magic.

The trees were planted, by my reckoning, in the early ’80s. I moved to the area in 1981 and remember the tiny stick-like trees up and down the street, struggling to survive as drunks tended to bend them and snap off branches as they went from one bar to the next. Now, they have survived that abuse and grown, and the city desires to cut them down and start over.

I have written letters to a couple of the commissioners on this subject, and I have written Flagpole asking them to look back and research the origins of the trees. [Editor’s note: Flagpole published an article about Clayton Street trees on Jan. 22, 2014; it quotes an independent arborist saying they couldn’t be saved or moved.] One former commissioner wrote a pro forma letter that said, basically, thanks, but sorry, no help here. The other commissioner, who has been re-elected, did not respond.

I know, I will hear back that the trees are diseased, that they make messy leaves, that they are too close to the buildings, excuses ad nauseum. All these things are true to some extent. Nearly every tree has disease—it is called nature—and yes, they make a mess sometimes. Some of them are perhaps a bit too close to the buildings, and in some places the sidewalks have buckled. I have heard from some folks that the sewer lines are messed up by the trees.

I work on Clayton. I know we have drainage issues. A good portion of the old lines are decades old, some perhaps 100 years old or more. The new lines will not be affected by the trees; they will be new, with fewer seams for the roots to get into. The old lines survived all this time with the trees there, and the new lines can do the same.

I have heard they will plant new trees. Won’t these trees create the same drain issues in the future? This is a false argument. It is an attempt to change the subject, an attempt to diminish my only concern here, the trees and the future of Athens.

There are, however, solutions to most of these issues. Trees can be trimmed to minimize the branch structure, which will in turn slow down the growth and hence the footprint—the root structure—of the trees. Ever heard of bonsais? Many of these trees can be moderately trimmed, and the roots can be trimmed as well. Pavement surrounding the trees on the new sidewalks could be constructed of removable pavers. These areas could be attractively designed to enhance the street view. When the time comes that sidewalks are shifting, the pavers could be removed, the soil beds adjusted and the pavers replaced. These changes could be done over the years to meet some of the needs of the trees and keep the pavement neat and level. I have seen street construction in Italy that did just that.

We are not faced with rocket science. We live in a city full of creative folks and horticulturists and landscape designers at the university. Surely, if the city had any desire to save some of our natural past, it could come up with viable solutions.

I know that not every tree can be saved. A few are visibly unhappy and could come down. But most of them could survive another 20 or 30 years, if not longer. Ginkgos live for over 100 years, even though I have read that the city said they had reached their lives’ ends.

Something to consider as I write this plea: Some of the old buildings on Clayton are crumbling piles of brick and mortar waiting to fall to the ground. Look up at the roof lines and notice the cracks and wobbles there. Look at the crumbling rotting stucco surfaces on a few of the buildings. What would this city do when someone with big bucks wants to tear a couple buildings down and start fresh? I am pretty sure the city fathers would have a meltdown. Well, buildings are made by man; trees are made by God and nature.

You all have the opportunity to set the future of downtown now. You say you are progressives, then do something progressive. Commissions in the past have been prone to hire experts to tell them what they wanted to hear, so hire some that will solve this problem correctly and let them tell you that yes, they can be saved. Be conservationists and save as many of these trees as you can.

So, I ask the mayor, show us some leadership. There is no reason that all the trees should be destroyed so Athens can yet again pretend to remake itself. It doesn’t need to remake itself. It needs to move forward with as much of its natural history, as well as its man-made history, as intact as it can manage. Athens has a look like no other. Why make it look like a strip mall in Gwinnett County? Commissioners, I ask you as well, why not do the right thing, save some trees and save our beautiful downtown?