Bernie Sanders Isn’t the First Socialist to Run for President 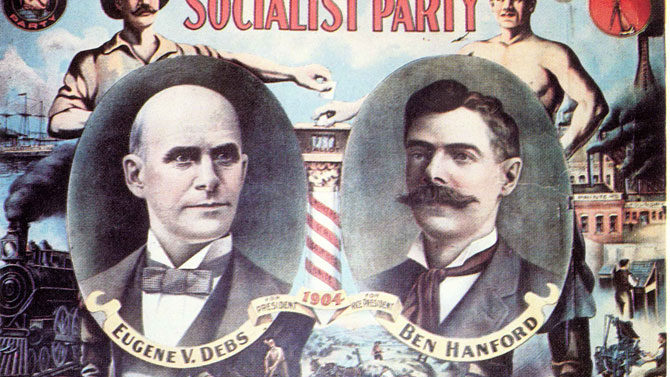 In the early 20th Century, roughly a century before Bernie Sanders’ long-shot run for the White House, another prominent democratic socialist, Eugene V. Debs, waged his own campaigns for the presidency.

Debs began his political career as a labor leader. Growing up in Terre Haute, IN, he dropped out of school at 14 to work on the railroads, scraping the grease from the trucks of freight engines. In later years, Debs founded the American Railway Union, leading it in the dramatic Pullman Strike of 1894. Taking the side of the railroad corporations, the federal government acted to crush the strike, send Debs and other union leaders to jail and destroy the American Railway Union.

As Debs brooded on these events, he concluded that unions could not win their battles for economic and social justice while giant corporations dominated the government. In Europe, workers were forming labor and socialist parties. Why not in America?

By 1912, the Socialist Party, with Debs as its presidential candidate, was a force to be reckoned with. In speech after speech, Debs set crowds ablaze. Eighteen thousand people crowded into Philadelphia’s Convention Hall to hear him. Another 22,000 packed New York City’s Madison Square Garden. As the novelist John Dos Passos noted, Debs encouraged workers to “want the world he wanted, a world… where everybody would split even.”

However, by 1920, Debs faced a very different situation. His beloved Socialist Party lay in ruins, while he was locked up again in prison.

In response to the Congressional declaration of war in April 1917, delegates at an emergency party convention declared their “unalterable opposition” to it. Fierce government repression and vigilante action followed. Drawing upon the Espionage Act—a loosely written law prohibiting any obstruction of the war effort—the federal government began prosecuting Socialist Party leaders. Meanwhile, the postmaster general banned virtually every Socialist newspaper, magazine or other publication from the mails.

Outraged by this assault upon civil liberties, Debs delivered a blistering speech that June at a party rally in Canton, OH, not far from the jail where two Socialist Party leaders had recently been hung by their wrists from a prison rafter. As federal agents circulated conspicuously through the crowd, he declared boldly: “The master class has always declared the wars; the subject class has always fought the battles. The master class has had all to gain and nothing to lose, while the subject class has had nothing to gain and all to lose.”

Thirteen days later, a federal grand jury indicted Debs for violating the Espionage Act. At his trial, Debs freely conceded his guilt. “I have been accused of having obstructed the war,” he stated. “I admit it. Gentlemen, I abhor war.” Sentenced to 10 years in prison, Debs spent a substantial portion of it in the maximum security penitentiary in Atlanta.

Meanwhile, the Socialist Party continued to disintegrate. A portion of the party, inspired by the Bolshevik revolution in Russia and convinced by government repression that American democracy was a sham, demanded a “revolutionary” strategy. When they failed to capture control of the Socialist Party from more moderate forces, they split off and formed two competing Communist organizations. Debs spoke out strongly against them.

In 1920, the battered Socialist Party leadership convinced Debs to make yet another run for the presidency. Confined to his prison cell and with his party in shambles, Debs could not wage an effective campaign. Nevertheless, he provided a potent symbol of democratic socialist ideals and government repression. In the election, he garnered 923,000 votes.

In late 1921, the new Republican administration of Warren G. Harding, barraged by petitions calling for Debs’s freedom, commuted his sentence and released him from captivity.

Although Debs died four years later, many of the democratic socialist ideas he championed—minimum wages, maximum hours, unemployment insurance, the abolition of child labor, collective bargaining rights, health and safety regulations, worker’s compensation, social security and a variety of publicly funded services—having attained some popularity, became incorporated into the program of the Democratic Party and, later, enacted into law.

Will the presidential campaign of Bernie Sanders, who has long revered Debs, be able to extend Debs’ legacy by securing national health care, free college education, a $15 minimum wage, a break-up of the giant banks, a more peaceful foreign policy and other reforms? Debs’ political career illustrates both the difficulties and the possibilities.

Lawrence Wittner is a professor of history emeritus at SUNY/Albany and author who is syndicated by PeaceVoice.