I Met an Old Friend at Junkman’s Daughter’s Brother 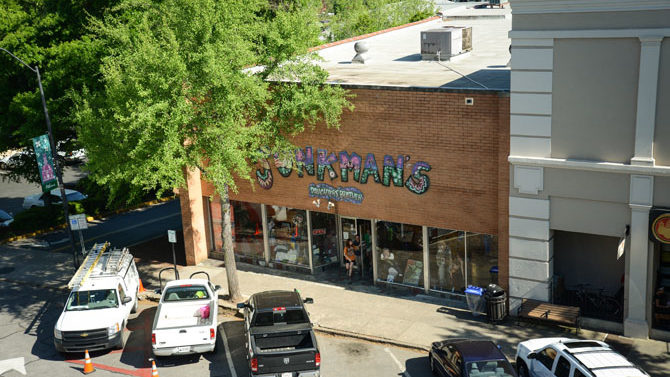 When I heard that Junkman’s Daughter’s Brother was closing, I thought about the groovy chili lights I bought there that still adorn my kitchen window, and the day, three years ago, when I met my friend Robert Ayers.

It was a chilly and breezy sort of February day, with the sun shining bright, and the blue sky airily passing by above. I saw a fella heading towards me on Jackson Street, looking up and around and seeming to be a bit lost. I had no idea this was my soon-to-be good friend, Bob.

A delivery truck was parked along the sidewalk, and as Bob walked towards me, the guy offloading the contents of the truck got to the spot in the sidewalk where Bob was. All three of us got there at exactly the same time. The delivery guy stopped, as I did, to let Bob pass. Bob bid us a friendly hello. I’ll never forget the first time I saw his beautiful blue eyes behind those big glasses, and the pale yellow windbreaker and his welcoming smile. Turns out, Bob was looking for Junkman’s. We pointed up the street; asked if we could walk him up.

I have always been keenly aware that talking to strangers can be a bad idea. But I can also tell you that sometimes, after carefully considering safety, that rule is not worth following. That would surely make Bob proud, as he is not the kind of guy who always follows the rules either.

Right there on the sidewalk, with the delivery man long gone, we stood and talked for at least 45 minutes. Bob told me all kinds of fascinating stories: how he and his wife Mary Frances met and how he got her to agree to dance with him; where they lived when he went to Yale Divinity School and some of the scholars they met while studying there. He told me about how he and his colleagues started the UGA Department of Religion and Philosophy more than 50 years ago. And how, when the powers that be tried to prevent the first African American students from enrolling, Dr. Bob and a few of his friends got involved, and in their own quiet way, worked some magic during those tenuous times. I learned more about the history of the university that day on that sidewalk than I had learned in many years.

Bob said he was throwing a party for some of his neighbors, who just happened to be college students, and he needed a costume; and that he was about to have his 94th birthday; and that his wife—his best friend for all of his adult life—had died the previous spring. He was on his own for the first time in more than half a century. I am still in awe of how happy he seemed with all of that going on, how ready he was for that party and how excited he was about that costume.

After our chat, he was on his way to the store, and I was on my way to the next adventure. Thankfully, I remembered his name when I got home. I called him right up.

He has graciously shared so much of his time and his friendship and his family with me since that day. He’s taught me much about a God who has a sense of humor and takes care of others. He introduced me to a world of philosophers and scholars and artists I had yet to discover. He’s opened my eyes to the philosophy of religion through his musings, and to the story of Koinonia, a place rich with historical significance for our state and for many people around the world.

I’m amazed by his ability to surround himself with so many different people from various backgrounds and all different ages. My daughter often chooses to visit him and his endless supply of ice cream, rather than go anywhere else in town for an afternoon of fun. These days, he’s teaching her to play pool. He says that he and Mary Frances would play eight games a day after he retired. Mary Frances usually won—by a lot. He says she could have played on the women’s tour.  When he speaks of her, there is joy and love and sadness and pride and humility all at the same time.

Because of this friendship, I feel a sort of connection to Junkman’s. After all, it’s the reason we met. I’d like to say thanks to everyone at the store for keeping things going long enough for me to make one of the best friends of my life.  It’s got to be one of the most precious gifts your quirky establishment could have ever provided to anyone in your fine town. I think I’ll invite Dr. Bob to have an ice cream cone with me as we send you off into the sunset. Who knows what stories await me?