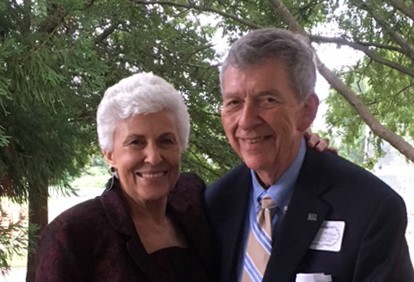 Waters received the key to the city from then-mayor Nancy Denson in 2017. Credit: UGA College of Environment and Design
by Rebecca McCarthy October 26, 2022

During a recent memorial service, the stories shared by his former students offered a portrait of University of Georgia professor John C. Waters, who died in August, and his many accomplishments. A landscape architect by training, Waters was a pioneer who co-authored (with former Carl Vinson Institute of Government director Mel Hill) the Georgia Historic Preservation Act, and spent years working for its adoption with former Georgia House Speaker Tom Murphy. The act passed in 1980.

In what is now called the UGA College of Environment and Design, Waters established the Master’s in Historic Preservation program in 1982 and its certificate program in 1987. That year, he also created a program leading to a law degree and a master’s in historic preservation.

With colleagues Richard Westmacott and Ian Firth, Waters saw the value of preserving cultural landscapes, as well as buildings and helped create a program and a certificate for it. He founded an honors fraternity for historic preservation students. For his teaching—and preaching—historic preservation Waters received the 2014 James Marston Fitch Award from the National Council for Preservation Education.

The John Waters his students loved was funny, generous and encouraging, known for his hospitality. His late wife Charlotte and he entertained them at their Milledge Circle home, designed by Frederick Orr, which Waters named Greyside. He enjoyed barbecue sandwiches and bourbon. Charlotte and he loved their many dogs and cats, and their house and its lovely garden. And they loved Waters’ students and helped nurture their careers.

One of Waters’ many tenets was that historic buildings need to have a purpose, said Ethiel Garlington, former director of the Church-Waddell-Brumby House and now the director of Historic Macon. It’s not enough to save the buildings; they must have utility.