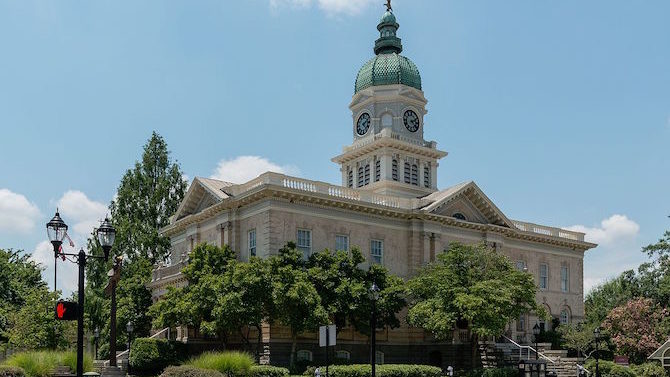 The final version of the budget the commission approved June 7—proposed by commissioners Tim Denson and Carol Myers—sets the property tax rate at 13.1 mills, a tenth less than Girtz recommended and 0.6 mills below the current rate. But the county government will still collect about $9 million more in property taxes because property values rose an average of 16%.

The Denson-Myers budget includes raises for ACC employees and library staff, $500,000 for overtime in the sheriff’s department, a wage study, traffic calming, park maintenance and transitioning away from gas-powered leaf blowers, Denson said. The main difference between it and an alternative proposal put forward by commissioners Mike Hamby and Ovita Thornton was the use of federal American Rescue Plan Act funds.

“In reality, for the most part we are all in agreement, despite there being two [commission-defined options] tonight, with the mayor’s excellent FY23 budget,” Myers said.

The Hamby-Thornton CDO included a millage rate of 12.95, which would save the average homeowner about $10 compared to the Denson-Myers version. “What we were trying to do in our budget is look for ways to give a small but hopefully meaningful, greater property tax break,” Hamby said.

It would have cut funding for a Leisure Services master plan, park maintenance and a new position in the Housing and Community Development Department and shunted some expenses off into the ARPA, the nearly $60 million windfall ACC received from the Biden administration. Other commissioners, though, want to use ARPA for one-time expenses rather than to temporarily fund ongoing programs.

Next year, homeowners could see a break averaging about $100 if voters pass a referendum raising the homestead exemption from $10,000 to $25,000. The referendum also includes additional tax breaks for low-income homeowners.

“The housing values are going up. That’s very real,” Myers said. “That’s because the housing stock is limited. We have more people wanting homes, which increases the price. We need to address our housing stock issues, and we also need to continue to work on helping those on fixed and low incomes deal with their property taxes so they can stay in their homes.”

Neither version of the budget included raises for sheriff’s deputies beyond the 6% step increase for all public safety employees. Sheriff John Q. Williams and several deputies appeared before the commission in a last-ditch effort to equalize pay between deputies and police officers—a disparity agreed to by the previous heads of local public safety departments.

Williams blamed a staff shortage at the county jail on competition from ACC police and other law enforcement agencies in surrounding counties where the starting pay is over $40,000 a year. “Bringing our deputies in at $39,000 a year is not going to cut it,” he said.

Both budgets did, however, include raises for workers at the ACC library, which is independent from the local government but relies on it for funding. Some currently make as little as $9 or $10 an hour, but the floor will now be $15, nearly matching the minimum wage for ACC employees of $15.60.

The Hamby-Thornton budget failed by a 7–3 vote, with Hamby, Thornton and Commissioner Allison Wright supporting it. The Denson-Myers budget then passed 9–1, with Wright the lone holdout. The budget takes effect July 1.

This post has been updated to correct the new wage floor for library employees.