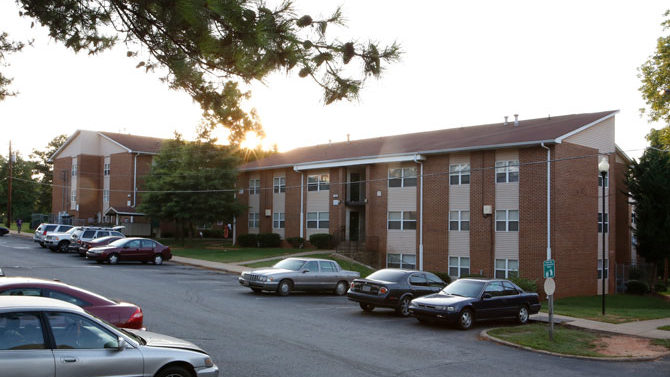 Bethel Midtown Village is being replaced with a denser mixed-income community. Credit: Adria Carpenter/file
by Blake Aued May 18, 2022

A plan to add hundreds of apartments to the city’s affordable housing stock by demolishing Bethel Midtown Village and building a new, denser mixed-income development is facing a $13.7 million shortfall, AHA Executive Director Rick Parker told ACC commissioners at a work session last week. The new development, when completed, will include 715–875 units, with one-third public housing, one-third subsidized for low- and middle-income tenants and one-third market rate, replacing 183 federally subsidized Section 8 units at Bethel and a handful of AHA units along College Avenue to the north. It will also include retail space, an expanded Athens Neighborhood Health Center clinic, a small-business incubator and other amenities.

But rising interest rates and costs for construction materials now threaten the project. If the budget gap isn’t closed by November, the project could be in danger of defaulting on $22 million worth of U.S. Housing and Urban Development Department tax credits. In addition, AHA, which purchased the property from Atlanta-based H.J. Russell, would have to pay $50,000 to residents who’ve been temporarily relocated during Phase 1 demolition so they can find permanent new housing.

“This is not a construction contract where we can simply wait for a more auspicious time before we begin to do the work,” Parker said. “Not building is simply not very much of an option in this case.”

In addition to the federal tax credits, the project is partially funded by $39 million in voter-approved SPLOST 2020 dollars earmarked for affordable housing. Columbia Residential, a private company specializing in public-private affordable housing, is also contributing a share. Parker said that Columbia Residential has already forgone the opportunity to build an entirely different project in order to obtain $6.5 million in tax credits to close an earlier shortfall.

The development team has found $4.1 million in savings and new funding sources, Parker said, and they are hopeful the Georgia Department of Community Affairs could kick in another $4.4 million. That would leave a shortfall of $5.2 million.

ACC currently has $5 million available in the SPLOST affordable housing pot, as well as $11 million set aside for affordable housing from the federal American Rescue Plan Act and $4 million in undesignated ARPA funds, Mayor Kelly Girtz said. He suggested drawing one-third of the shortfall from each of those accounts.

While some commissioners debated taking more from SPLOST or ARPA, they agreed that the money needs to be found. “I think we’ve come too far not to finish,” Commissioner Mike Hamby said.