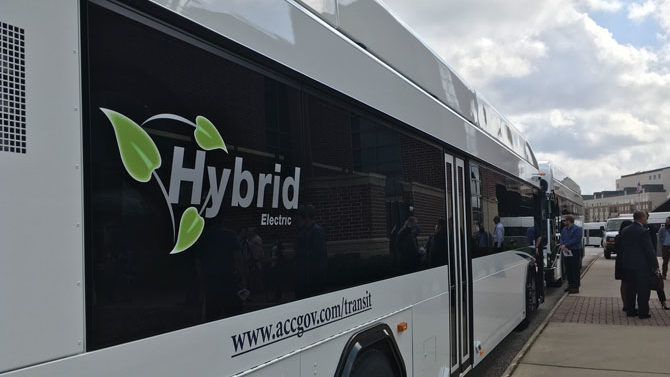 Athens Transit has not charged during most of the pandemic, partially to protect drivers by allowing passengers to board through the rear door, and partially because people who are still riding transit tend to be low-income and rely on the service to get to work. UGA ridership has dwindled to nearly nothing because most classes have been online or have had a virtual option, and many employees continue to work from home or are driving to campus.

Funding includes $150,000 from the federal CARES Act passed in March, $316,000 from county reserves and $400,000 worth of service cuts. Buses will continue to run hourly and stop at 7 p.m. More help could be coming from the most recent coronavirus relief bill Congress passed last month, although most of the $14 billion it included for transit appears to be destined for big cities, which have been hit hardest. Several commissioners—most notably Tim Denson—have been pushing for fare-free transit for years, so there is a possibility that the mayor and commission could opt to keep the policy when they approve a 2022 budget that takes effect July 1.

A split commission also rejected a proposed apartment complex off Lexington Road near Ben Epps Airport. The developer had agreed to set aside 12 of the 112 units as “affordable,” with rents ranging from $650 for a one-bedroom to $775 for a three-bedroom, which enticed some commissioners, but critics noted that the commitment is unenforceable under current county laws. They also cited noise from planes passing overhead as an issue, as well as safety concerns if a plane should crash in the airport’s flight path, where development is generally restricted. Both the county Planning Commission and the Airport Authority recommended denial. Denson and commissioners Mariah Parker, Melissa Link, Jesse Houle and Patrick Davenport voted in favor of the development; Allison Wright, Russell Edwards, Carol Myers, Ovita Thornton and Mike Hamby voted against it; and Mayor Kelly Girtz broke the tie.

In other business, the commission rejected a contract with student-housing developer Landmark Properties to convey county-owned land to the Athens Downtown Development Authority to build a new parking deck for a new Classic Center arena approved by voters as part of SPLOST 2020. The plan would have called for Landmark to build the 1,200-space deck and share it with ACC and the Classic Center, but the deal fell apart because of uncertainty about costs related to stormwater drainage and other issues, according to Girtz.

Instead, Landmark intends to build a parking deck to serve the second phase of The Mark in between Pottery and Wilkerson streets, Girtz said. ACC will build a 900-space deck off Hickory Street and seek another private developer to lease nearby land to provide a revenue stream for the Classic Center arena. Commissioners were also concerned about the complexity of potential alternatives to a Potterytown parking deck, according to Girtz.

In addition, commissioners selected Edwards to serve as mayor pro tem for a second year. The mayor pro tem consults with the mayor on meeting agendas, leads budget hearings and fills in when the mayor is unavailable.

It was also Myers’ first meeting after being sworn in to represent District 8 on the Eastside. She won a three-way race in June to replace former commissioner Andy Herod, who opted not to run again after 13 years on the commission. Houle started his first four-year term as well, although he has been on the commission since November, when he won a special election triggered by the death of his incumbent opponent in the June election, Jerry NeSmith, to serve out the last few weeks of NeSmith’s term.

Georgia Lawmakers Will Look at Voting, HOPE Funding and More