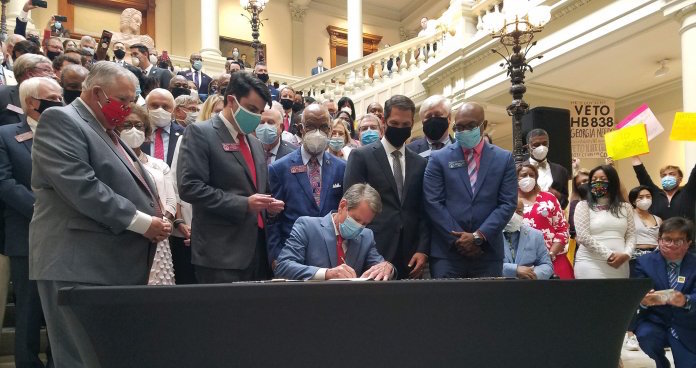 Georgia K-12 schools will lose nearly $1 billion and public colleges and universities $250 million under the budget approved by the state legislature and signed by Gov. Brian Kemp last week. But at least there will be no furloughs.

In April, Kemp asked all state agencies to propose 14% budget cuts, as reports of tax revenue plummeting came in during the first month of the coronavirus shutdown. The University System of Georgia proposed to lay off 735 employees—including 220 at UGA—and freeze another 1,341 empty positions. In addition, most employees would have taken four or eight unpaid furlough days.

The 40-working-day session went down to the wire, adjourning just a few days before the new fiscal year started July 1. By the time the legislature reconvened in mid-June after a long COVID-related layoff, the financial picture was clearer. Tax revenue had recovered somewhat, and Kemp now wanted “only” 10% cuts.

“While we were able to avoid draconian cuts, balancing the budget was hard,” Kemp said before signing the budget June 30. “In these challenging times, this budget reflects that reality.”

There were alternatives to cutting $2.2 billion from the budget, though, which is why Athens Rep. Spencer Frye and most other Democrats voted against it. Lawmakers did pass measures closing a loophole in the law requiring online retailers to pay sales taxes, requiring online lodging rental services like Airbnb to remit taxes and slapping a new tax on vaping devices. But those will generate a relative pittance. The big fish were reversing the 0.25% income tax cut Republicans passed last year, which put just a few dollars in most workers’ pockets but cost the state half a billion; and a cigarette tax hike. Raising taxes on cigarettes from 37 cents a pack (the lowest in the nation) to $1.37 (still below average) would bring in an estimated $550 million. That revenue could have helped lawmakers avoid some cuts, such as:

• the elimination of a $25 million funding hike for school counselors, meaning the state will not be able to meet its minimum student-to-counselor ratio of 450:1.

• an 11% cut to the Cooperative Extension Service, which assists farmers and gardeners.

• $11 million from the dual enrollment program—popular among Clarke County students—capping participants at 30 hours of college credits.

• $8 million in cuts to the Department of Public Health.

• a $46 million reduction in federal funds for foster care, even as Athens faces an ongoing crisis in finding enough foster families for local children.

“As these cuts go into effect and Georgia’s schools, health care institutions and more are impacted, GBPI urges lawmakers to return in January and raise revenues so that our state can recover from COVID-19 and eventually prosper,” said Jennifer Owens, senior vice president at the Georgia Budget and Policy Institute.

Here are some other measures that passed (or didn’t). Note that Kemp may or may not have signed some of these bills by the time this issue hits racks.

Local Impact: Despite the 10% cut to the Quality Basic Education funding formula, which makes up about half the Clarke County School District’s budget, CCSD was able to avoid cuts, through a combination of higher tax revenue from rising property values, federal CARES Act funding and dipping into reserves.

The Board of Regents approved the USG’s 2021 budget on July 1. UGA President Jere Morehead announced there would be no furloughs. Whether layoffs are still in the mix is unclear. The United Campus Workers of Georgia union has urged the USG to avoid layoffs and not to cut graduate assistants’ stipends or raise student fees. The BOR has already said tuition will remain the same for the 2020–21 school year.

No matter what happens, Georgia never seems to run out of money for buildings. The 2021 budget includes $43 million for the expansion of STEM lab space at UGA, $5 million to finish renovating the Driftmier Engineering Center and $2.2 million to design a new Poultry Science Complex.

Criminal Justice: Georgia is no longer one of four states without a hate crimes law after Kemp signed one on June 26. The alleged murders of Ahmaud Arbery in Brunswick and George Floyd in Minneapolis, among other acts of violence against African Americans, finally motivated the legislature to pass a bill that had been bottled up in the Senate. After adding what some lawmakers referred to as a “poison pill” in the form of protections for police, senators removed that provision, then voted overwhelmingly in favor of the bill, along with their House counterparts. A bill making it a crime to attack or file a false report against a first responder passed separately.

Several lawmakers switched positions this year, including Reps. Houston Gaines (R-Athens) and Marcus Wiedower (R-Watkinsville), who voted against the hate-crimes bill in 2019. The law provides additional penalties for crimes committed against people based on their race, gender, religion, sexual orientation, national origin or disability. Arbery’s family, the NAACP and the ACLU said the legislation didn’t go far enough, though, and they also urged the legislature to ban citizens’ arrests, which it did not do.

Two bills authored by Gaines also passed: One bans people convicted of human trafficking from driving commercial vehicles for life, and the other makes it easier for people to clear minor criminal offenses from their record.

Crosstie Burning Ban: Both the House and Senate unanimously backed a bill banning the burning of creosote-soaked railroad ties at power plants in neighboring Madison and Franklin counties. Residents near the plants had rallied against them, saying that Georgia Renewable Power misled local officials about the impact, and that the plants’ noise is a nuisance and the chemicals they emit are harmful to their health and the environment. “It took a handful of determined, outspoken people to make something happen like this, in honestly a short period of time,” Gina Ward , co-chair of the Madison County Clean Power Coalition, told the Georgia Recorder.

Health Care: Funding for Medicaid rose by $178 million, mostly to account for the increase in unemployed people who are now eligible for the program. $20 million of that money is earmarked for fully funding efforts to curb maternal mortality—mothers in Georgia die in childbirth at rates approaching some Third World countries. $12 million was also added to grants for stabilizing struggling rural hospitals, and $1.3 million will go toward training more doctors at the UGA–Augusta University medical partnership in Athens.

A “surprise billing” bill passed that requires insurance companies to provide customers with more information about which doctors and hospitals are in-network.

Kemp has already signed a sweeping nursing-home reform bill. Administrators at long-term care and personal care homes are now required to be licensed, and the law adds more training and staffing requirements. Such facilities’ operations have come under scrutiny as many have become COVID-19 hotspots.

What Didn’t Make It: Perhaps Kemp’s top priority when the legislature convened in January was a $2,000 pay raise for teachers, to fulfill his 2018 campaign promise of a $5,000 raise. The legislature approved $3,000 last year. This year, a skeptical House cut Kemp’s budget request in half to $1,000, even before the coronavirus recession began, then eliminated it entirely.

Bills that would have eliminated permitting and licensing requirements for gun owners, made it legal to brandish a firearm during a dispute, and let people carry guns into churches and on Ubers, and carry rifles in state parks, did not make it to the floor for a vote. One such bill was sponsored by Rep. Matt Gurtler, a Republican candidate for the 9th Congressional District who’s facing a runoff with Athens gun store owner Andrew Clyde.

The “religious liberty” bill that was a major issue but stalled out in recent years did not re-emerge in 2020. Critics said the bill would have legalized discrimination against members of the LGBTQ community; instead, legislators passed the aforementioned protections.

Local legislation requested by the Athens-Clarke County Mayor and Commission doubling Clarke County’s homestead exemption to $20,000 for low-income homeowners was not introduced. A request to move nonpartisan local elections to November also didn’t make it. Frye, Gaines and Wiedower cosponsored such a bill, but it was amended in committee to only include school board races and didn’t proceed any further.

Frye introduced a bill giving local governments more control over penalties for misdemeanor marijuana offenses, but it went nowhere. ACC police are not currently arresting people on marijuana charges, but local officials say they have no control over what other law enforcement agencies do or the sentences handed down by judges.